As I mentioned in a prior post I started using a fitness tracker to track activity, initially using my phone and Google Fit (which sucked, btw) and now using a Garmin VivoFit 2.  I started the Garmin a little over a week ago, so no fancy models yet.. BUT I do have some initial data to look at.


The Garmin is awesome, and seems fairly accurate.  One bonus is that when I'm inactive in the office, it beeps and tells me to get up and move.  This is also annoying, and somewhat embarrassing as many of my coworkers have them as well, so they know that I've been lazy.

The Garmin only misses two major pieces of my activity, the exercise bike in the basement (I average 254 miles a week) and the stairclimber at the gym (I average 400 flights of stairs a week).  These misses aren't a huge issue, but I may figure out a way to add them back in at a later date.


Now To The Data

First sleep:  This is a huge area of interest to me. To be completely honest here, I have felt tired since early December, and have wondered I'm getting older, not sleeping well lately, or if the flu I had around Thanksgiving is still impacting my body.

Anyways, here's my number 1 lesson: my sleep is a lot more variable than I would expect.  Basically anywhere from under 7 to almost 9 hours a night.  Not enough data to draw any conclusions, but maybe more regular sleep would help? 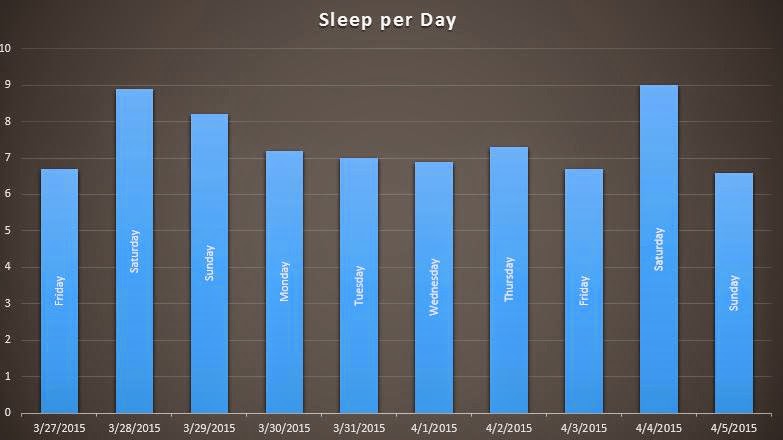 Now steps:  My steps are a little more variable than I thought, and my mid-week totals were  disappointing.  I think I'll work on moving more during the work week, and then see if there's anything additional I can model.  Also, I want to set a goal of 20,000 steps a day.

Note that this weekend's steps totals were far below last weekend's, because we were travelling for Easter this weekend. 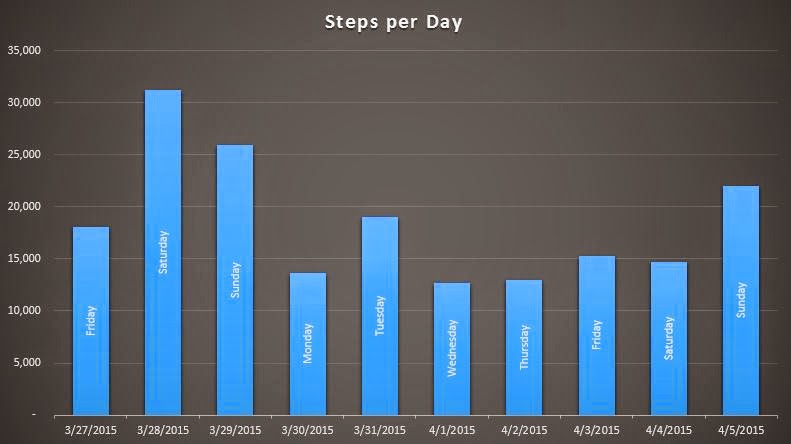 Finally the data together:  Not enough to draw any correlations from data, but of note:

I both move less and sleep less during the work week.  Is this due to being less tired from less activity, or does stress impact sleep negatively, which makes me move less?  Only time and a lot more data will tell. 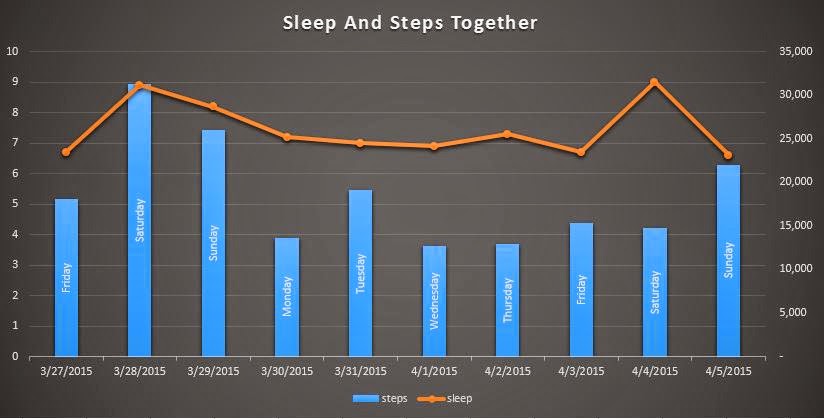 I'm going to keep looking at the data, and see if I can develop an algorithm to predict a "next" day's activity from current data, and additionally to correct my mid-week cycle of sleeping poorly and not being active.

Right now, though, I'm a little worried I'll be sleeping at my desk this afternoon, as last night was the lowest sleep time recorded, combined with an above average activity day yesterday.