Reduction of Multinomial Data: Measuring Diversity with a Single Number

A decade ago I was confronted three coworkers with a major data problem.  They were trying to make a meaningful statement on whether or not certain entities had become more racially diverse over time.  They were looking at numbers like this (these are 2010 total US census numbers):

The problem they faced was this: How do we show a change in racial statistics over time (which is generally expressed as a series of six or seven numbers) in way that's accurate and easy to measure  and communicate?

The analysts had a few good starts, but none of them really measured diversity:
So I took a couple of days to think...

After a few days of thinking, I came up with a metric, which I called:  Effective Number of Races, or my diversity index, calculated as:

This metric isn't necessarily a new idea; but it's derived from other fields where it's necessary to measure heterogeneity in multi-nomial variables. Two examples: in economics (effective number of firms: How many firms are REALLY active in this sector?) and political science (effective number of parties: How many parties are REALLY active in this parliamentary system?).

So for comparative purposes I can use this score to compare diversity among different populations and sub-populations.  For instance:

This analysis clearly demonstrates, through a single number something that we already know: the US Government is significantly less diverse than the nation as a whole.

This is good for demonstrative purposes, but what about predictive purposes?  Can diversity be predictive of political, social, or economic outcomes? 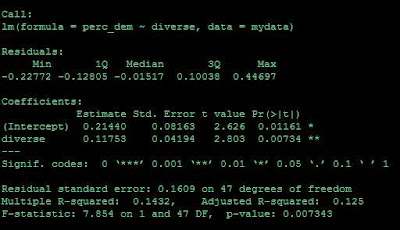 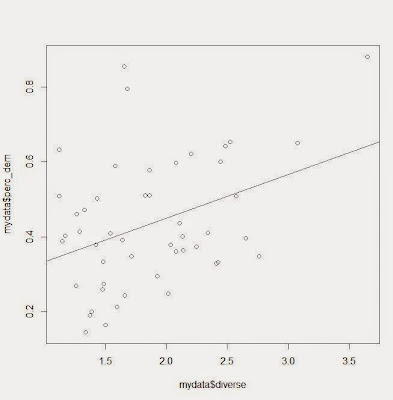 (BTW, to do this I had to calculate diversity values for each State, if you're interested in that data let me know) 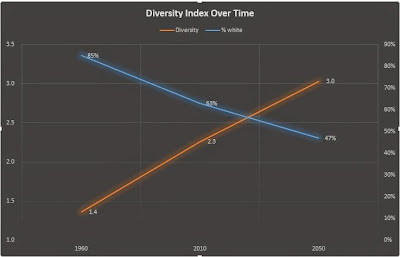 One of the cases I wanted to analyze was one that has been covered in the media: the diversity of the population of Ferguson, MO to that of its police department.  Here are the values I received:

As we may expect, there is a huge differential in the diversity values.  Unfortunately though, because Ferguson is overwhelmingly African American and the Police department is majority white, the diversity index actually underestimates the effective differential here.

The diversity index can serve as a powerful metric to measure differences between populations, subpopulations, change over time, and to predict the impact of diversity on various outcomes.  However, in instances of flipped majority groups (Apartheid South Africa, for instance) it is not a good proxy measure for inequality.