I've been promising for a few weeks an update on fitness tracking results, then not delivering.  I'm going to fix that today.  In fact, I'm going to take this entire week to fix that, starting my first ever "Fitness Week" - which is actually just me taking a very nerdy look at numbers.

Here are the posts I'm laying out for this week:

Today: This post.  Just general update on what my fitness tracker has been tracking.
Tuesday: On "targeting" and its distributional impacts.
Wednesday: Aggregate fatigue, what happened to me three weeks ago.
Thursday: Product review, of my Fitness Tracker (Garmin Fit 2)
Friday: My updated model of fitness data.

Let's start today with some easy data (it is Monday after all).  How active am I per my fitness tracker?  Here's the summary of my steps per day data:

I know, ugly and pulled straight from excel, but it shows what we need, just some observations on steps:

But what does this actually look like? First lets look at steps. Here's a cumulative distribution graph that I like to put together when analyzing relative frequencies. 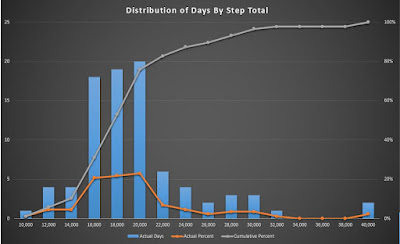 The distribution is obviously not normal, but in my mind it's not that unexpected. 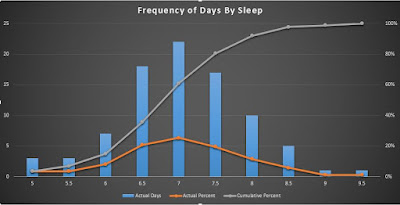 So, I'm meeting my goals on steps which makes me very happy. My sleeping hours are normally distributed, but I'm not convinced this is evidence that I am sleeping "correctly."  I'll spend the rest of the week modeling and diving into these numbers more deeply.