Many businesses are seeing value from mining the vast amounts of text data they accumulate, meaning for analysts text mining skills are in high demand.  For analysts new to mining text, the analysis can seem intimidating.  From a primal-analyst perspective it goes something like this:


Analyzing words?  I don't do words!  I do numbers!


So I make fun of myself.  But on a serious note, the amount of pre-processing, data cleaning, and understanding of "language" concepts can make textual analysis a scary prospect.  Whenever tackling a new type of analysis, I find it best to start with small, familiar datasets.  Luckily, Twitter data both works well for text mining, and is easy to get started with.  In this post I'll take you through the basic steps of importing and cleaning twitter data; tomorrow I will show the results of some initial topic models.

The twitteR library in R provides a nice direct way to connect to twitter and import data.  Unfortunately this requires a twitter developer account and some authentication shenanigans, so it's not the easiest way to get started.  Instead, if you're just looking for a quick intro, I suggest going into the settings of your twitter account, and requesting your archive as a CSV.


OK, so now we have the data.  What do we need to do to get started.  Here are the initial steps to prepare the data: 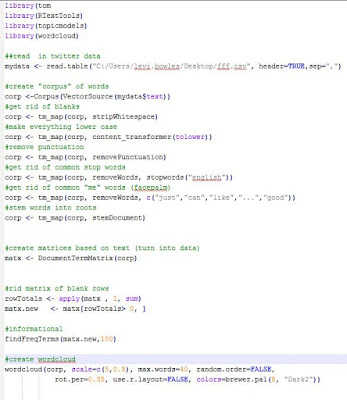 Except, I don't feel that today's post is very meaningful.  I mean, where's the content?  See the last step in my code.  Here's the wordcloud it created (I'm not a fan of wordclouds, but whatever). 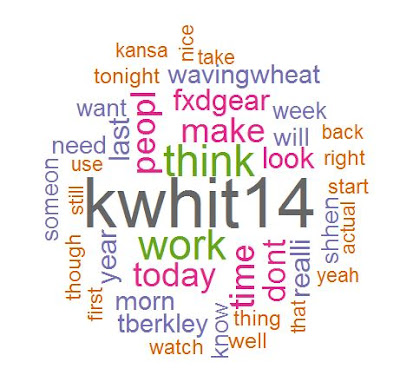 The word cloud makes a lot of sense.  At the center is "kwhit14" which is the twitter handle for my wife, who I talk to regularly on social media, sometimes when we're in the same room.  The next two words are "work" (I tweet about work stuff quite a bit) and "think" (on those psychological tests I'm told that I am a "thinker" rather than a "feeler" meaning that I would express what I think rather than what I feel).  The words descend from there, a lot of common words, and references to people I talk to often online, and terms I use often.