I thought about this data far too much over the weekend.  On Friday I received data by precinct for the State of Kansas 2014 Governor's race, which had never been available before.  Here's my post on that. A reminder of where we were on this data on Friday:


Let's start with a deeper dive into Johnson County

Counter-intuitively, after 500 voters, precinct size correlates positively with Republican share of the vote.


The idea behind this, is that most precincts under 500 voters are rural, republican leaning districts, whereas after 500 voters, she would expect the precinct size to republican % to level out, or become more Democrat leaning, because larger precincts would be at the urban core.  I have explained the problems with this logic in several different blog posts.  Effectively, precinct creation is not a randomized process, thus many covariates, demographic and otherwise come into play.  I even  demonstrated how Clarkson's analysis dries up when we expose the data to those covariates.

But is there a move visual way to demonstrate how this works?

Focusing on Johnson County, I highlighted all of the precincts with 500 or more voters in the 2014 Governor's election, and then went on to classify each one by larger buckets.  After 500 voters per precinct, the smallest precincts are the ones closest to the urban core, while the largest are in the outer-rural suburbs.  This map demonstrates that relationship: 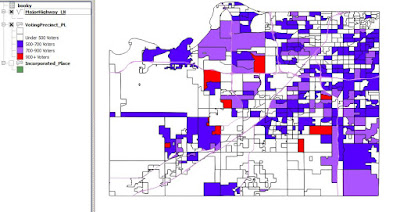 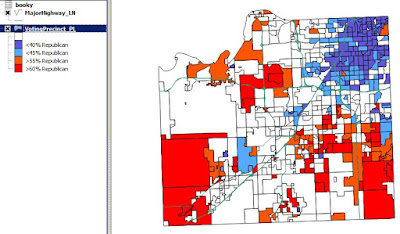 What does this mean?  It validates two things:
In essence, the primary hypothesis of Clarkson's analysis is flawed, because these a priori relationships exist.

I acquired one more county of data today, this time Sedgwick County with plenty of 500+ voter precincts.  If you're from outside of Kansas, Sedgwick County is where Wichita is located.  This county also validated Clarkson's correlation.  Here are our outputs, first graphed, then R. 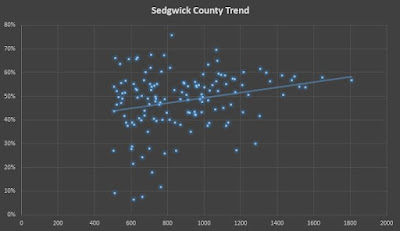 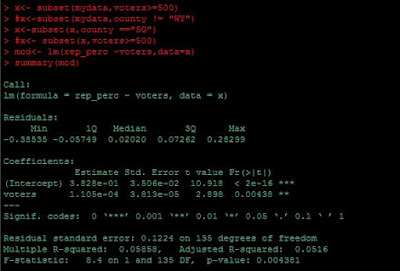 I will keep posting on this as more data comes in, but two big takeaways from today.