It's been a while since I blogged about football, and it's about time again.  I know the cool sport for statisticians to like is baseball, but keep in mind I grew up in Kansas during the 80's and 90's, and that the Royals sucked from roughly 1986-2013.

A couple of background posts.  First I watch quite a bit of football and have an interest in predicting the outcomes of games.  Second my interest in sentiment mining or classifying text (tweets) by their general emotion expressed.

The football models I made earlier in the summer generally outperform other "pre-season" models simply based on win-loss records, because they try to measure underlying performance, beyond prior year aggregate win/loss. One thing they don't account for are "soft" factors, that are difficult to measure in data.  For instance injuries to important players, players under-performing but still winning, off-field issues, Tom Brady getting divorced, etc.

So my goal in sentiment mining is to enhance my predictions by also including general external sentiment about how a team is doing week to week.  That is-Twitter can serve as a generalized proxy for those soft factors.  Here are my research questions:
Because the regular season hasn't started yet, I can't prove forward predictivity, but I can determine if tweets correlate backwards to last year's performance.

For methodology I downloaded tweets associated with the hashtag used for each NFL team.  Then I used my sentiment mining algorithm (naive Bayes) to determine the emotion and polarity for each tweet.  The St. Louis Rams were enough of an outlier (3x more negative than other teams) that I removed them (they're going through some stuff right now). 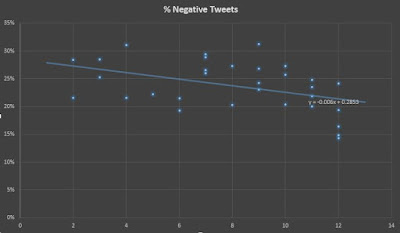 The biggest outlier found was the Bills who were one of our more negative teams, even though they had nine wins last year.  They didn't make the playoffs though.  Which led me to a second and more statistically significant conclusion:

One last piece of not-statistically-significant but otherwise interesting evidence.  Our two lowest negative-tweet receiving teams?  The Seahawks and Patriots, the two teams that played in last year's Superbowl.