Big news, Beth Clarkson finally engaged with me in debating her statistical analysis.  Oddly enough, the discussion occurred on Esquire.com's forums.  Yes, in the forums of a "men's" magazine. Weird.

I would describe Clarkson's argument online as follows:
More on the Esquire conversation later, but first, some updates on data.

Sometimes I blog about data issues and don't adequately explain to my lay audience.  One twitter commentator has even said I should start a series on basic statistics so people can understand these types of things.  Here's an example of my recent commentary that possibly wasn't the best explanation:

One quick side note.  There's something else that increases correlation when we aggregate results.  Because the majority of super large precincts are in Sedgwick County, it gives leverage to some of these precincts.  And because all-in Wichita is a more conservative region than Johnson County, that leverage serves to increase the correlation, though due to no nefarious or unexplained phenomena.

The biggest problem here is that this is the concept of leverage, as well as "mix" (ie, the mix of counties) needs to be shown graphically.  Luckily, this is easy in the ggplot2 R library.  Here is a scatter of Clarkson's correlation with counties color coded.  In this you notice the more liberal counties tend to have mid-large precincts (Wyandotte, Douglas, even Johnson county) while more conservative Counties (Sedgwick, Other Rural) make up a propensity of the largest precincts.  This enhances Clarkson's correlation when counties are combined, simply due to the mix of counties, not in-county nefarious action by voting machines. 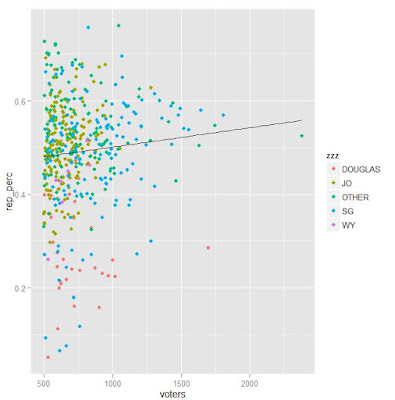 I'm still working on this data.  To be honest the OCR worked horribly, and I received no adequate response from the County.  I sent a followup email to the Secretary of State's office this morning.  I will post their response here.

I am not the only person working on this.  Some of the better conversation regarding this topic has occurred over on DailyKos (I know, I know), with several "diaries" devoted to the subject.  One of the better ones recently was by user HudsonValleyMark, exploring the same correlations I looked reviewed.  Specifically, his work draws the correlation back to original voter registration data.

What does that mean?  It means that party affiliation at registration is also correlated to total number of voters, long before we get to the voting machine.  I suggest reading his work, but I also validated his work using Johnson County data in 2004, see chart below, first validating Clarkson's correlation, then replicating HudsonValleyMark's work. 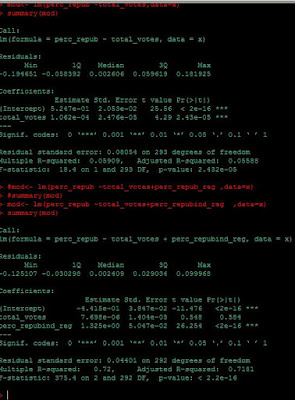 Remember my three points from earlier in this post on Beth Clarkson's arguments in the Esquire forum?  Let's revisit and go through those one by one.  Here's her final response to me, which encompasses all three arguments:


We seem to be in agreement that the null in my case isn't true. I disagree that it invalidates my work because I feel the cause is what is under debate. Your suggestion of assuming a particular prior distribution may or may not be appropriate. I haven't looked at it deeply enough to know for sure. In short, I'm agreeing that you could well be right about that.
That our electronic voting machines are eminately hackable and have no post-election audit procedures in place are established facts and are equally concerning to me. Do you diagree about that aspect? Are you satisfied with assuming a distribution that fits the pattern? Or do you agree that our voting system should be (but isn't) transparent enough for citizens to feel confident that the results are accurate?

Here's my response one by one:

Quick summary of what we've talked about in this blog post: