Three hour debate?  Seriously?  After my wife and I realized it was going to be three hours we started recording the debate and watching something else.  I intended to watch the rest of the debate later, but why would I do that when I can just run an algorithm and review the results?  Here's a summary take-away of what I found:

I downloaded about 100,000 tweets with the hashtag #GOPDebate the morning after the debate.  I used normal text scrubbing, stemming, and data-izing methodologies.  Then I went to work analyzing the data, including a wordcloud, topic modeling, some basic sentiment modeling, and summarizing of data.

What everyone wants, here's our resultant wordcloud, note that Trump dominated the text, with "Trump" being even more common than the word "debate." 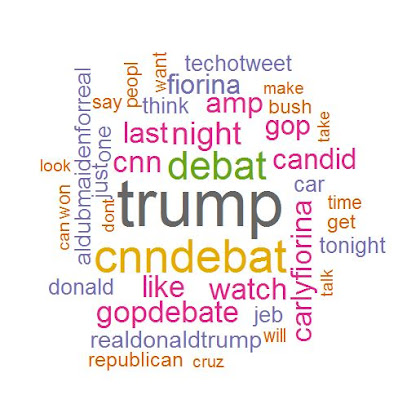 I also created a few topic models to try to parse out what topics were being discussed during the debate.

It turned out the topic models didn't converge as well as I would hope, why?  A few reasons:

If a debate is a competition to generate twitter traffic then Trump won clearly.  Here's a graph of top candidates and their respective twitter volume.  I also overlayed some sentiment data as well.  Trump clearly wins with nearly double the twitter volume of any other candidate.  He also had a lower negative tweet percent than any other candidates, but there's a reason for that, which I will address later. 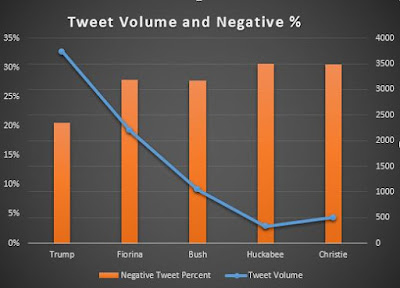 What about a more objective view of who won, given that debates aren't really Twitter volume competitions?  We can look at the terms that are most associated with the words "winner" and "loser". 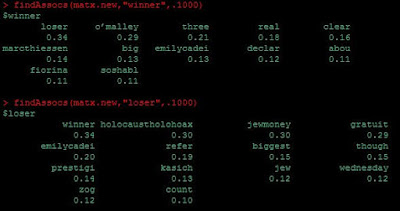 Notice a lot of reporter names and other references end up in this list of most associated terms, largely because they are the ones discussing winner/loser outcomes.  However, in our winner list Fiorina is the only candidate name to show.  In our loser list we see John Kasich's name.  From the little bit of debate I saw, Kasich wasn't necessarily a loser, it was just very unclear why he is still in the race.  This isn't a perfect methodology, but it does speak to a twitter consensus:  When discussing winners of the CNN GOP Debate, Carly Fiorina was the most frequent topic of conversation.


Looking at the issues and topics statistically associated with candidates has a couple of applications.


Here are the related terms for some top candidates: 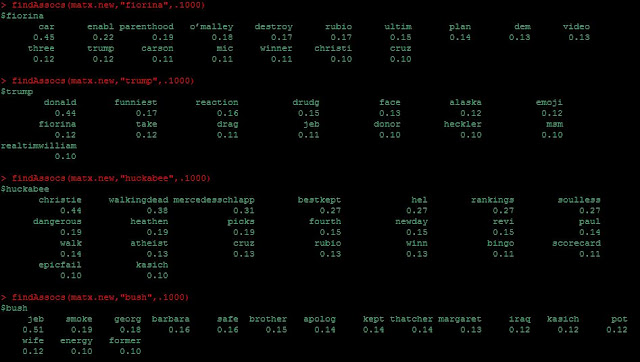 And some quick analysis:

A few bullet points to close this out: