After the democratic debate last night, my wife asked me who I thought won.  I had no clue, actually. I could say three people who didn't win, but the debate wasn't a clear decisive victory for either front-runner, Hillary Clinton or Bernie Sanders.  Why not try to derive who won the debate from social media like I did for the Republicans?

I'll just start out with my take from the debate, somewhat sarcastic, and limited to two sentences each.

Ssame methodology as normal, I downloaded and analyzed a sample of tweets from after the debate and analyzed.  Then I calculated the number of tweets related to each candidate and the positive percentage.  Clinton and Sanders had a similar number of tweets, but tweets mentioning Clinton were a bit more positive.  The rest of the field went Webb, O'Malley, and Chafee, with Chafee getting only slightly more attention than Barack Obama (not running, FYI). 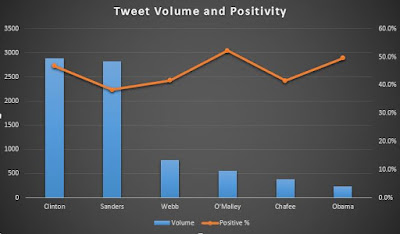 Oh, and a wordcloud demonstrating talk after the debate.  Note that only Clinton, Sanders, and Webb make the cloud. 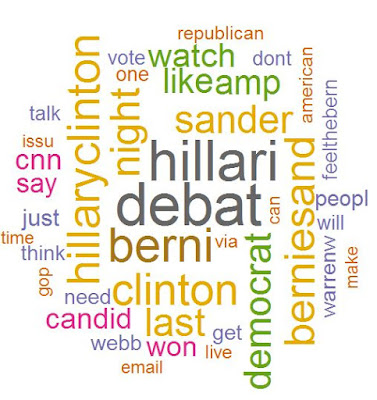 So what topics were talked about following the debate?  I ran a quick Correlated Topic Model to determine the topics.

TOPIC 1: People talking about facts of the debate generally the morning after, focusing on who "won" the debate.
TOPIC 2: Topic focused on people talking about Bernie Sanders saying he was tired of hearing about Hillary Clinton's emails.
TOPIC 3: This is a topic focused on what is being referred to as the "Warren Wing" (Elizabeth Warren) of the party (warrenw is the stemmed hashtag).  Bernie Sanders is largely seen as the most Warren-esque candidate.
TOPIC 4: This is the Hillary focused topic, centered around Hillary's performance, and CNN all-but declaring her the winner of last night's debate.

Then I looked to see if any candidate names are disproportionately associated with the word "won" and "winner to declare a winner in this debate (obviously this isn't a great predictive strategy, but it's at least an amusing way to see who is most associated with winning the debate in social media).  Here's what I got:

Senator Warren's name comes up here once again, many people are pointing out, using similar language that the ideas presented were largely Elizabeth Warren's.  But she's not running, do any actual candidates come up?  The name Bernie does, but the word "snore" proceeds it in the ranking.  For the word "winner," "unclear" is a top word, which looks to be a fairly broad consensus in media as well.  It's unclear who the actual winner of last night's debate was.
Posted by Lb at 2:28 PM