KU Football: The Chase for a Winless Season

Last week I posted on the probability of the University of Kansas Football team losing every game this season.  Since then, the team lost again, thus increasing the probability of a winless season. I also found some great information on the topic of futility in college football.

I found some great information on horrible college football teams since I last posted, scouring the internet for infomation. Two great pieces:

My prior methodology gives a good estimate of how likely it is that KU will go winless based on historical probabilities.  This is especially true in the first week when the entire Big 12 season is laid out in front of us.  But there is one bias to the estimate:  KU is significantly more likely to win some games than other games.  Complicating this, is that KU's statistically easiest game was the first game of the Big 12 season, after losing which, the probability of going winless increases dramatically.

While a team that only wins 6.8% of their games doesn't see a drastic difference in probabilities from game to game (wins are essentially a "fluke" and not as tied to opposition talent as competitive teams), we can still estimate the relative strengths of teams, using their individual probabilities to lose, and then weighting KU's probability by that.  This methodology looks at the historical performance of each team, and adjusts the 6.8% by that performance.  Here are the probabilities that each team will win their KU matchup this year: 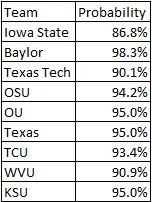 The other worst team in the league (ISU) only has a 86.8 percent chance of beating KU, whereas the best team (Baylor) has a 98.3 percent chance to beat KU.  Relatively speaking, this means KU is about 8 times more likely to beat ISU than Baylor.

Because KU played ISU first,  their probability of a winless season increased from 53% to 61%.  My initial model only had it at 57% following a conference week 1 loss, but that flat model didn't account for Iowa State's poor play.