When researching my post from earlier this week, I downloaded some data that wasn't immediately helpful: By county total employment statistics from 2001 to 2014.  The data wasn't initially useful, but yesterday I created some maps that are fairly interesting when looking at job patterns in Kansas 2001-2014.  A few takeaways I found:

To start off, I mapped total workers by county, to get a sense of where people worked.  First by 50K buckets.

That's not as meaningful as I thought it might be, only four of 105 counties have more than 50,000 workers.  Johnson and Sedgwick are dominant.  Let's break that down into a bit more meaningful buckets, here each bucket has an approximately equal number of counties in it.

That's a bit more meaningful, and the combination of the two maps give us an idea about where most jobs are in Kansas.  Johnson and Sedgwick Counties, then the rest of eastern Kansas, then a few hot spots in Western Kansas (Ellis, Finney, Ford).

First I let QGIS break down the counties as it saw them, by 10,000 worker change buckets.  Below dark red indicates net loss of jobs, orangish is a gain of jobs between 0 and 10,000.  The bright green is Johnson County at +35,000.

This gives us an idea that Johnson County is an outlier in jobs growth, but by how much?  A summary chart below makes the point in numbers, but essentially: without Johnson County, Kansas counties are net-negative in Jobs since 2001.

The above map shows aggregate job change, but a better measure of impact to individual counties is percent change.  Here's a map of job growth and loss mapped by percent change. There's also a chart below that shows the biggest winners and losers in jobs over this time period.

And below is the same information in chart form. 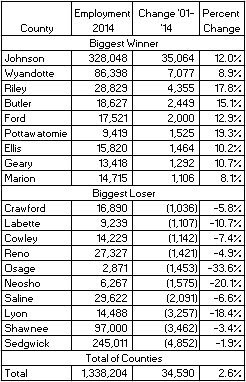 Because the data was available in my GIS layer, I calculated the ratio of total workers to population aged 18-65.   Here's what that looks like:

The variance range was larger than I expected but two things seemed to pop out.

I just pulled these maps together from data already on my desktop, but here are a few summary points: