County Level Unemployment and Determining Cause from Correlation

(A bit of data/mapping ADHD, we're going to go through a lot of maps, very fast!)

Someone pointed out to me that the Kansas side of the KC metro area currently has its lowest unemployment rate in 15 years.  Though this is interesting and positive,  it started me down a path that led to far too many mappings, and a tie into potentially spurious voting correlations.

If you have spent much time in the Kansas side of the Kansas city metro, you know it's the tale of two counties: white; affluent Johnson County, and a mixed, poor Wyandotte County.  Here's how the two counties compare on selected metrics: 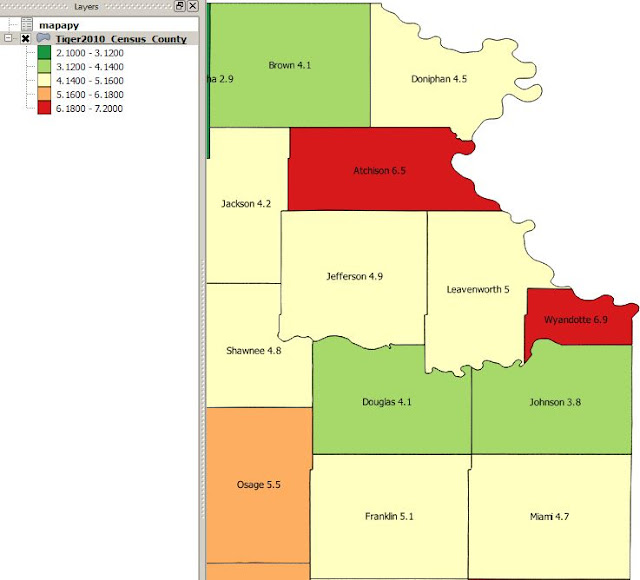 This is close to what might be expected, Johnson county has the lowest rate in northeast Kansas, Wyandotte county has the highest, and the margin between them (3.1%) is striking.  But while I have this data on my desktop, why don't we look at the entire state.

Three things struck me about this map:

What is that map?  A map of percent of voters voting for Sam Brownback by county.  Interesting.  I wondered if there might be a correlation.  Two charts proved that there is a fairly significant correlation. 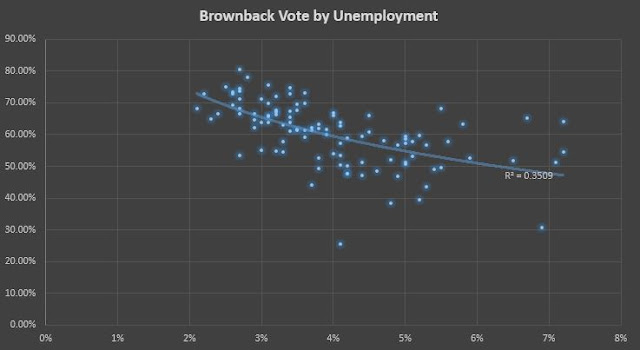 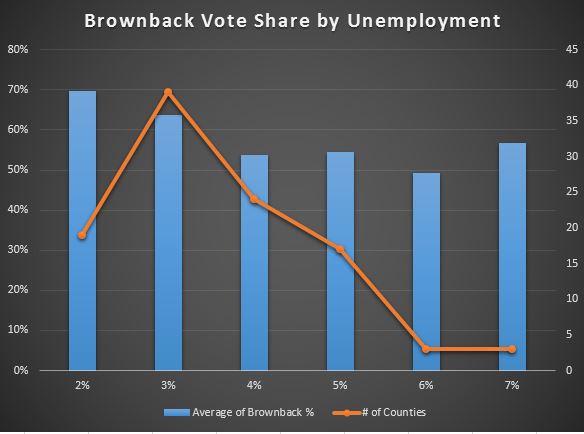 People say "correlation is not causation" so often that it annoys me.  But this is a great case for explanation.  My thoughts:
There's another factor at hand though, which *could* have an effect.  Areas with lower unemployment rates could be more conservative generally, due to rational benefits.  The argument here is that low unemployment leads to lower political demand for social services, which are generally considered a liberal policy.  In this case unemployment rates could be at play, but more broadly as a general indicator of well being, and not a preference for an individual candidate.

Obviously this post has been a bit ADHD, but a few takeaways:

And a few more maps, unemployment rates over time:

Email ThisBlogThis!Share to TwitterShare to FacebookShare to Pinterest
Labels: government