After the weekend and our post on Friday, a lot of people pointed out that Bernie Sanders won big on (what CNN was calling) Super Saturday, so it appears he's moving in the right direction towards my March 15th drop-dead date!

Three primaries were held on Saturday, Kansas, Nebraska, and Louisiana.  Kansas and Nebraska are demographically similar Midwestern states with Bernie-favoring caucuses, whereas Louisiana was the outlier Southern primary State (with almost as many delegates as Kansas + Nebraska).

Here's a summary of what happened with the delegate count.  Notice that though Bernie saw small wins in the Midwestern States, he lost Louisiana by a huge margin, and thus lost the day.

Lucky for Bernie, there was another primary (this time in Maine, a Bernie-friendly New England State) where he won fairly easily.  Here's what the entire weekend looked like, with Bernie bringing home 51% of total delegates for the weekend (67-64).

That 51% victory sounds good for Bernie, but is that an adequate margin of victory?  First, let's look at how the press is reporting current aggregate primary election delegates: google is still showing super-delegates: 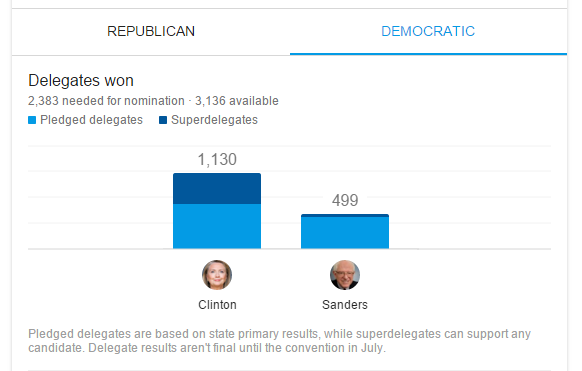 Super delegates, as we discussed before, may or may not actually vote for who they are currently supporting.  I recreated our "fair" view into the current state of the race.  I made a slight change from last time, and backed the super delegates out of the "to win" number, making the basic assumption that super delegates will, as they did in 2008, follow pledged delegate counts. 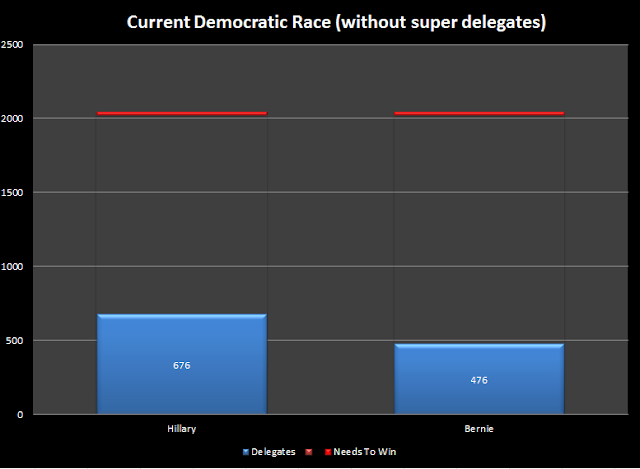 
In essence, Bernie supporters may be happy about his performance on Super Saturday, but he needs to do quite a bit better than that to close the gap on Clinton.

A couple of quick notes on the current tone: