Another morning and another celebration from Bernie Sanders supporters on Facebook.  This time it seems fairly valid: Bernie won the Michigan primary, where he was trailing by 20% in the polls. A big win for Bernie, demonstrating the polls that show him down by 10% or more may be biased, and a big failure for public polling.  Also a win for snark against the media (whom many Sanders supporters consider biased towards Hillary).  Here's my favorite piece from Facebook: 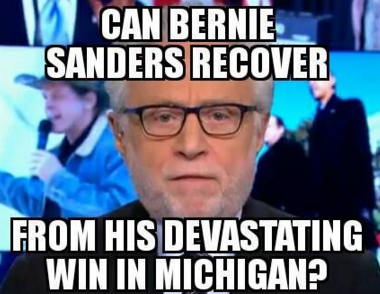 There's just one problem, and it's the same problem as Saturday. Bernie won Michigan by a slight margin, but lost big Mississippi (under-performing polls by 20%, hey, at least pollsters got it right on average.. there was a lot more polling in Michigan though..).  In net, Bernie still took a double-digit loss to Hillary, in the range of about 20 delegates.  Let's dig into the numbers a bit though.

I've shown my *fair view* (without super delegates) in the my prior posts (found here and here), so I won't spend too much time on them today.  Here's a view of Bernie winning the big state, yet losing the daily delegate count:

And here's a view of the fair delegate count, once again showing Hillary expanding her lead, but with the majority of delegates needed for nomination still outstanding: 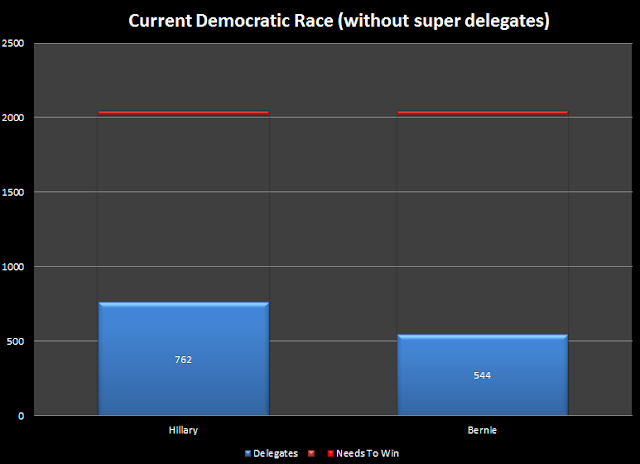 Let's take stock of what we know (references findings of two prior posts):

I put all this information together and realized the question:  Is there still a path to victory for Bernie?  Then I went to developing

(If you aren't a real nerd, you may want to just skip this)

From my past analysis I knew that Bernie needs 54% of remaining delegates to win; which means he also needs to outperform his current polling in the majority of states.  I put together a model to project the margin by which Bernie needs to beat polling in each state.  This method will also allow us to set to set targets along the way, and adjust future needed values as Bernie over and under performs to target.

I analyzed Bernie's current polling by State, using RCP polling averages, but more heavily weighting recent values.  In states where polling wasn't available, I used polling in demographically and geographically similar states.
We know that Bernie has to beat polling, and if it was easy as figuring out the % he has to beat polling by in each state, (e.g. +12% in each state) this would all be quite simple algebra.  The problem here is that Bernie's potential to outperform varies by State. For instance, it's not reasonable to think that Bernie would pickup the same % in a state where he's currently only getting 20% of the vote as he would in a state where he's getting 45%.

A sigmoid-type function fits both prior data, and makes a priori sense (less chance for variance at ends of the distribution, more in the middle).  I used a logistic function to calculate percent increase, holding each State to the same logit change over initial polling results,  Then I calculated the required  aggregate logit change to put Bernie ahead in the delegate count nationwide (value currently logit(p) =  0.51).

Here's what that logit improvement correlates to in actual numbers (e.g. if he's currently polling at 45%, he needs to perform 58% in that State to be on track). 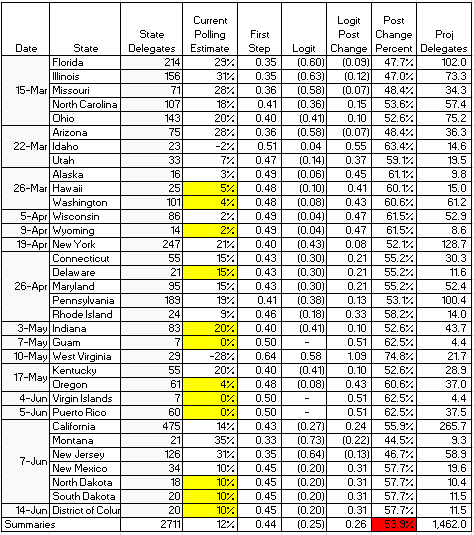 A few notes on these numbers:

Some takeaway points:
Posted by Lb at 1:42 PM