Our piece from last week on whether or not Bernie Sanders can still win the democratic nomination was massively popular, so we thought after last night's primaries we should update the analysis.  This post seeks to answer the question simply: Does Bernie still have a chance?  Please reference our prior post for methodology and meaning questions.  Here's a summary:

First a look at Bernie's performance from last night. It was fairly dismal, but also on target with recent polling.  That means that he's not significantly outperforming polling numbers like our prior post found he would need to beat Hillary.  Here's last night's stats:

Now on to our friends at Google and how they are reporting the race.  We like the table they've added below the graphic! 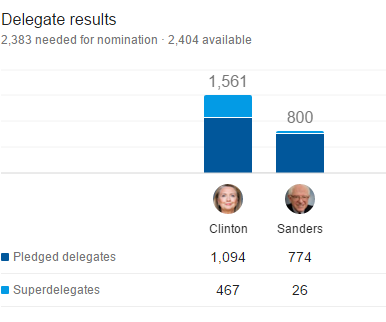 And now our view, that shows where candidates need to get to win the nomination.  Hillary's lead is much more clear at this point.  (Please note this uses a very specific model for super delegate agency, whereas super delegates, in the end, follow the popular vote.) 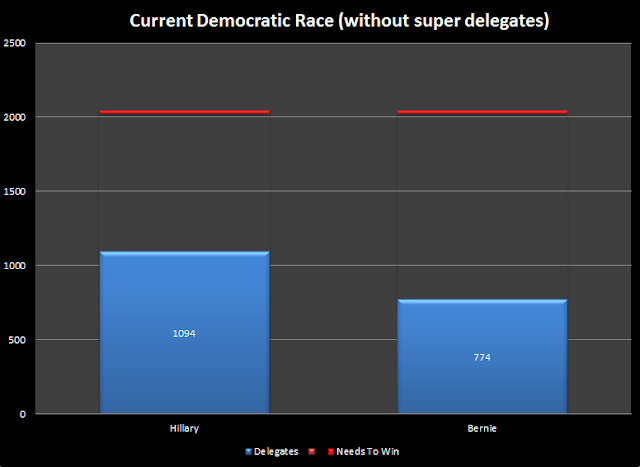 We're going to use the same methodology that we used before, it's a bit technical but here's the gist of it:

We calculate the amount (using a mathematical logistic function) that Bernie needs to outperform polling by in order to win the nomination.

Once again for detailed method, look at our prior post. We have a "now unassigned" category this week, mainly for delegates from last night that haven't been assigned yet due to some complex party rules. Here's our output: 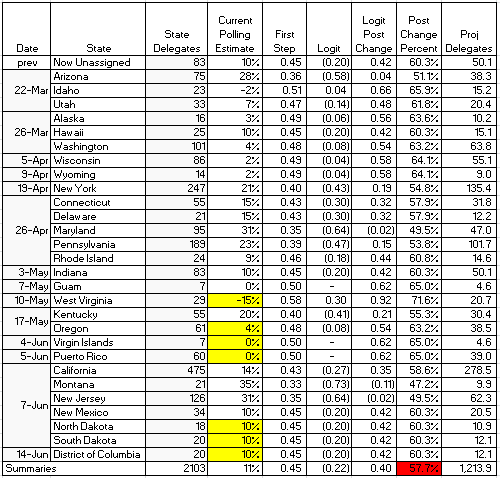 To win the nomination, Bernie now needs to capture 57.5% of outstanding delegates.  Our calculus shows that requires a logit improvement over current polling of 0.62.  So... what does that mean in not-crazy math terms:

Bernie will have to average (by-state, not weighted) beating current polling by 15.2% in order to win the nomination.

Some people will inevitably say that is doable given the Michigan results, but Michigan isn't representative of polling error in other States.  In fact, a quick look at recent results show that Hillary has out-performed Bernie about the same number of times that he outperforms her.  Side note: in Mississippi she outperformed polling by more than Bernie did in Michigan.

Michigan is a true outlier, as a state with a lot of rigorous polling, where the pollsters ended up being quite wrong.  One last view at this, here's a new chart of how Bernie needs to improve polling by current percentage.