Once again, I am not a Bernie Sanders supporter, but some friends talked me into looking at the data surrounding this primary, and I have found it fascinating. I spent a bit of time trying to figure out how to describe my feelings on Bernie Sanders performance Tuesday night, and "Held Serve" is the sports term that I think is most relevant.

Bernie won two states by huge margins, but lost the biggest state (Arizona) by a significant margin.  In net, it turns out not to be a huge win, and doesn't fundamentally change the numbers for the rest of the race.

Other websites have detailed accounting of the Tuesday elections, including some craziness in Arizona, but the summary is this:  Bernie lost Arizona by more than expected, and won Idaho and Utah by much more than expected. Because Arizona is bigger than Utah and Idaho combined, Bernie performed slightly though not materially better than this blog's "Bernie Sanders Performance Improvement Plan."

After Tuesday night, Bernie sits in a similar position as he did before, no worse, and no better, really.  He picked up a few delegates over my initial posts, but not enough delegates to fundamentally change the race.  He still needs to win about 57% of remaining delegates to win.

On the positive side for his followers, he over-performed polling in two western states, so they can likely argue that he has a chance in the rest of the west.  Here's what the delegate counts look like now, first the google view, and then our fair, sans super delegates view. 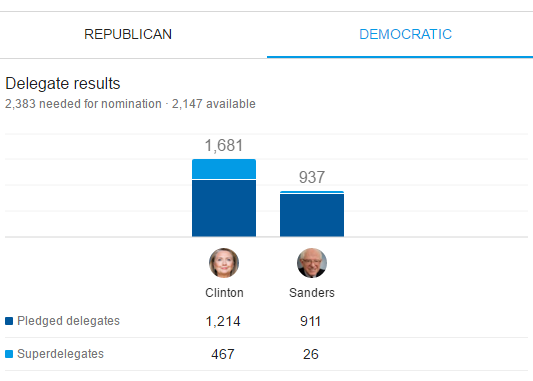 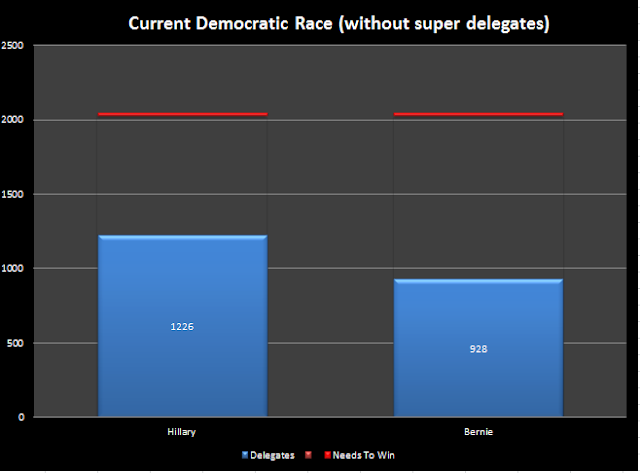 If this is the first time you've looked at this analysis, you can read the full methodology here.  Essentially, this analysis looks at the pledged delegates required to win (assuming supers will follow), and then uses a logistic function to calculate how much Bernie needs to outperform polling by in each remaining State in order to win.

How is this helpful? In two ways really:


Here's the data, with polling and what Bernie needs to do going forward to have a shot. 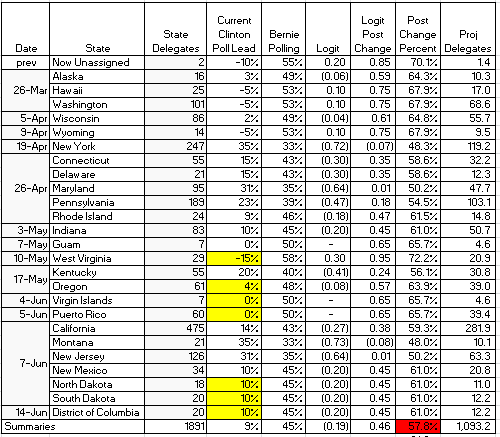 SHOULD BERNIE DROP OUT AND MORAL HAZARD

I had a few open questions after all of this analysis that I wanted to address.  The first question was: can we project when Bernie will drop out?  To be honest there have been quite a few opinion and think pieces on this in the last few days, ranging from he should drop out now and get out of Clinton's way to, he should wait and see what happens at the convention (e.g. my very low probability scenario where super delegates try to take the party to the left when faced with a Trump opponent). 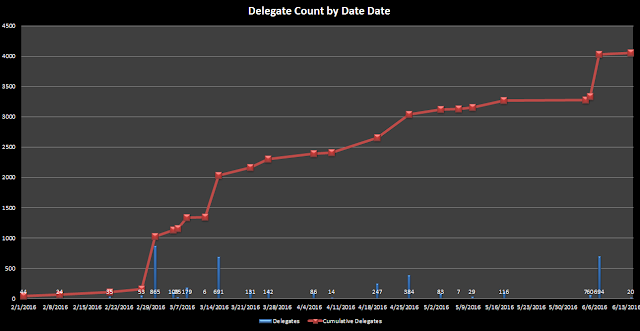 There's another thing about Bernie's campaign that is bothering me right now, and for lack of a better term, I'm calling it the Sanders Moral Hazard.  I think additional research into this area would be interesting, but here's generally how it lays out: