Though not a Bernie Sanders supporter, I seem to have a lot of friends and acquaintances who are. As the primary moves on, I've noticed the Bernie fans becoming increasingly disgruntled at the primary process, the democratic party establishment, Debbie Wasserman-Schultz, and generally the mainstream media.  This led to a telling Facebook message from an old college friend, with this general question:


The mainstream media seems to be writing off Bernie, but he's still in the race, so he still has a chance?  It also seems like the media is over-stating Hillary's lead by counting super-delegates that could change their votes, is that true?

The root of my friend's question revolves around a weird quirk in the way the Democratic party nominates candidates:  super-delegates.The definition of super-delegates are effectively this:


An unelected delegate who is free to support any candidate for the presidential nomination at the party's national convention.


Super-delegates have been a huge source of fear in the last couple of election cycles largely due to the uncertainty they create.  There was a theory in the 2008 election cycle that super delegates would nullify the people's will of nominating Barack Obama, and stick to party-favorite Hillary Clinton.  That obviously didn't happen, and when states started to swing to Obama, a good number of super delegates realigned their votes as well.  (Side note: 2383 delegates are needed to earn the nomination, there are 714 super delegates.)

The stats perspective is more interesting though: we have an outstanding number of delegates that will impact the nomination, and don't have a good way to estimate their allocation them because they don't follow state vote counts. We could ask them, but because they are humans, they tend to change their minds.

Here's where my college friend is right: the current vote counts on many websites are fairly misleading, because they are looking at current endorsements of super delegates, which (as we saw in 2008, somewhat) can change over time.  Also, they are excluding a number of "uncommitted" super delegates who may be more likely to be Bernie supporters waiting for him to show some progress (Clinton got a boost early by looking like the favorite all along). 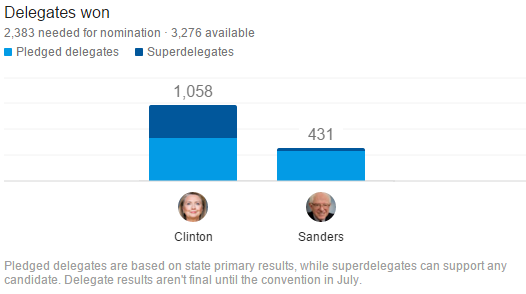 And here's my more honest view of things, with pledged delegates only, as well as a top-line for how many delegates needed to win the nomination. 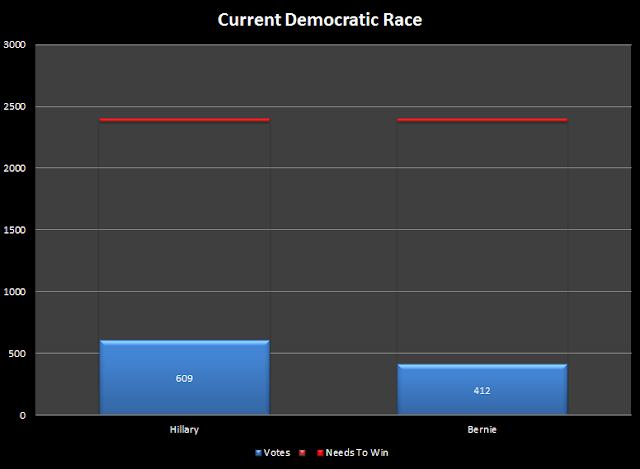 The point here, the initial views put out by the media are misleading, and there are still a lot of outstanding delegates out there.

Since this is still a competitive race, how can we evaluate Bernie's chance to win remaining states?  Let's start with some good news for Bernie fans, Clinton's polling lead (nationwide polls only) has been declining fairly steadily since the middle of last year, shown here:

That means that Sanders is picking up ground in the polls and velocity is with him, but there's still some bad news in the polls: he still trails Clinton by an average of 10% nationwide.

More bad news for Sanders is that the next two weeks of primaries don't look very promising for him.  Though state polling is fairly irregular, he doesn't have a polling lead in any of the next eleven states. Some of the States show huge Clinton leads, so it's relatively unlikely he will turn the overall delegate count around soon.  His performance will be interesting in Illinois and Michigan, as they may be telling in how he will perform in the rest of the Midwest and West (the former confederacy is clearly Clinton territory, Bernie performs better in his home-area, the northeast).  Here's a view into the next two weeks; I'm not willing to go beyond this at this point, because of recent movement in national polls. 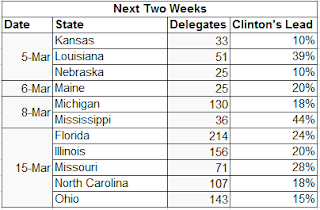 We've established that Bernie is losing the election, though not by as much as the mainstream media have been reporting.  Also, we've seen that though he's gaining in polls, he probably won't make much delegate progress in the next round of primaries.  Is there still a path to victory for Bernie?  Maybe.  I can see two scenarios:

What are the takeaways from all this?