I read a book! OK, I read a lot of books, but I also like to pretend as though I'm marginally literate in light of my librarian wife who reads many more books than I do.

The book was "Sprint: How to Solve Big Problems and Test New Ideas in Just Five Days" written by some guys at Google Ventures (GV), a part of Google that buys/invests in startups and then works with the startups to grow into successful companies. 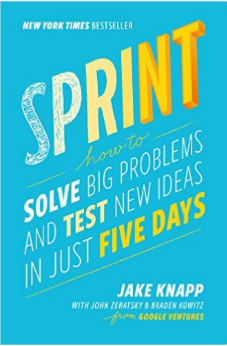 This book is essentially a business book, but I think it can be useful for data scientists especially in product/project development.  The book details the process of taking a "sprint" week where a company focuses on making very rapid design and product improvements by exclusively focusing efforts on a specific project.  I think this kind of focused "sprint" has quite a bit of potential in algorithm and data-science product development work, although the prototyping and testing phases might look quite different.  I may try this one my own, and see what happens, here are some positive and negatives:

*Side note: I sometimes like to on-the-fly calculate the costs of meetings I attend by estimating salaries, backing in to hourly rates, and the multiplying. My second day in my career I was placed in a 3 day meeting (7 hours a day) with 10 people who averaged $37 an hour in salary ($49 ish including benefits).  Here's what that cost of meeting looks like (this is when I worked for government, private sector meetings tend to look more expensive due to higher salaries):

Email ThisBlogThis!Share to TwitterShare to FacebookShare to Pinterest
Labels: business