Trump and Breitbart Alliance: A Match Made on Emotion?

For the Trump campaign, this week has been fairly crazy, highlighted by naming the CEO for conservative news organization Breitbart.com (Steven Bannon) as the CEO of his campaign. There has been quite a bit of punditry on this subject, but that's not really the place of this blog. I'm focusing on a follow-up to our prior post on Trump's use of disgust to drive engagement, emotional reaction and (ultimately) political support.  First, a summary of earlier findings:

For this project, I used the same effective code and methodology as my prior post on Trump's use of disgust in tweets.  I made a few improvements (some code at the end of this post).

For commentary on the meaning of the charts, please reference the prior post on Trump's use of disgust. The basics are this: we use a sentiment mining algorithm to measure the overall emotion of tweets, and then aggregate the results to each user (candidates and news agencies) and relate that to engagement to determine which emotions drive social engagement results for which groups.

First our emotional term index, which shows that Breitbart is actually the least emotional-sounding news agency, comparing to Foxnews which is most emotional. 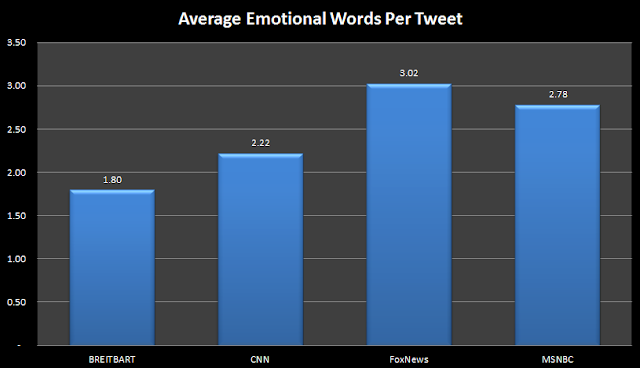 Next we summarize the normalized emotional tendencies of each news agency.  Breitbart (of special interest) wins on use of "disgust," MSNBC wins hugely on "surprise", and CNN wins on "trust" emotions.

That last chart demonstrated an important component related to our prior post: Trump's strategic ally Breitbart news also tends to use a lot of disgust emotional language and signaling in their tweets. But are they as successful in driving engagement by use of disgust as Trump is? Time for a statistical test.

My prior post received quite a bit of traffic, but was a bit intellectually lacking in my opinion. I had demonstrated Trump's relationship with disgust, and his followers reaction to it, but I hadn't looked at two other dimensions:
To test this hypothesis I created 64 linear models which serve as statistical tests to determine the effect of emotional language on engagement measured by retweets (side note: I threw in my own tweets as a comparison). The code for those models are found at the bottom of this post, and the results are in the heatmap directly below.

An easier visualization of the disgust measure, looking first at candidates, then at news agencies (x axis is a disgust rating, y axis is a retweet count) 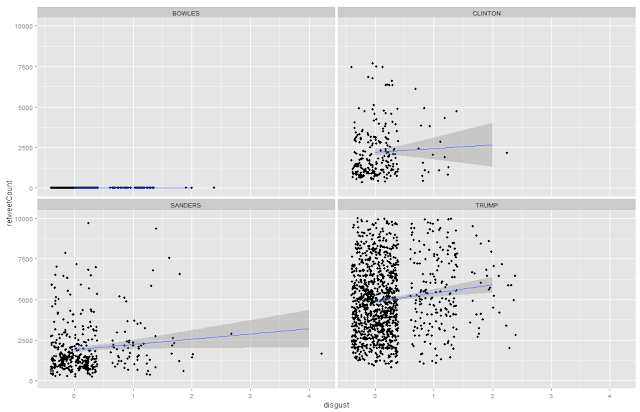 A few bullet points in closing: