Over the past three weeks, I've seen the same promotional advertisement (in radio, TV, internet channels) what seems like 100 times. Here's the promotion: 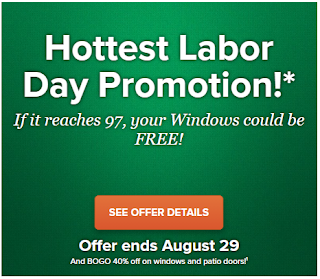 According to the fine print underlying the ad, this promotion can be summarized as:

Sign up for new windows in your home from this company before August 29th, and if the high temperature on Labor day at Kansas City International Airport is at least 97 degrees, your windows are free. There are also financing options, which allow you to defer any payments for a full year.

My wife and I bought an older house in Lenexa, KS (KC Metro) two years ago, and planned on installing new windows sometime in the next ten years, so this is an interesting deal to me. But what are the chances of free windows from this deal? I wanted to look at three questions:

My first reaction to this kind of problem is to go download a ton of data and calculate probabilities. But I wondered how less data savvy individuals might assess the risk probability (the average person won't have a good way to estimate this probability). I took a quick polling of people I knew in KC, asking their perception of the odds of a 97 degree Labor Day. Their values ranged from 8% to 50% with a central tendency in the 15-20% range. So generally people assumed that there was a one-in-five chance of this contest paying out.

Then I downloaded all available history for KCI high temps from NOAA as well as additional confirmatory data from other Kansas City weather stations. In the last 43 years, there has only been one September 5th with a temperature at or above 97 degrees. I plotted high temperatures on September 5th over time. 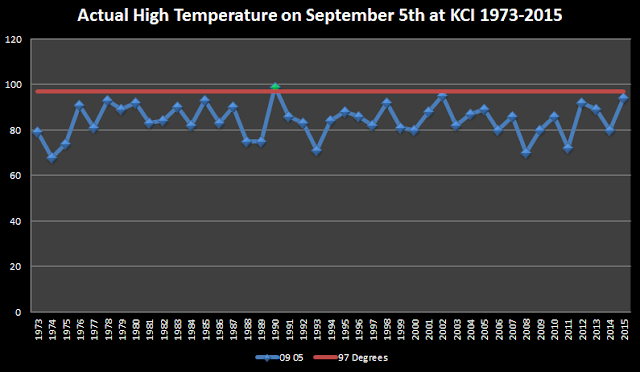 So initially, once in every 43 years would be a probability of about 2.3%, but with only once case, and a sample of 43, we're in a bit of a data crunch. So I expanded my sample in two ways. First, I looked at surrounding days, analyzing all days between September 3rd and 7th. Then I looked at additional weather stations around Kansas City, extending the view back to 1950. My final estimate:

(Nerd note: Obviously there's a clustering issue as daily temps aren't independent, and same-day temps at different local weather stations aren't either. However, it does provide additional information to the credibility of the estimate).

So there's a chance, but a very small one, and people (and by the existence of the promotional material) seem to over-estimate the chances of this occurring. I wondered if there was any time of the year when there would be a greater than 20% chance of a high temperature at 97 degrees or above. (To meet this condition the 80th percentile temp would have to be above 97 degrees)

The below graph shows mean, 80th percentile, and record highs throughout the Kansas City summer months. Though the high can exceed 97 degrees from mid-June until Mid September, the probability of that has historically only exceeded 20% (ie, 80th percentile) one day of the year (July 17th). Due to surrounding data points and limited data, that value is likely subject to volatility, and potentially anomalous.

WHY PEOPLE OPT IN

A few thoughts on why I think people would opt in for this type of marketing, despite low payout odds:

My prior job was largely in risk analysis, so it is natural for me to consider why a business would take this kind of risk. It seems that giving away free windows to everyone who signed for this deal could effectively end a company. Keep in mind, it isn't like the lottery where one person wins. If there's a winner, EVERYONE (who bought windows) in Kansas city wins. The answer? Well, a few ways to mitigate risk:
There are likely other ways to mitigate this risk, but I'm certain this company has an understanding of the risk of payout, and likely understand consequences of *winning.*

From this blog entry, I've laid out that the contest has relatively low chances of winning (4.5%), but people may misperceive that risk for one of many reasons. Even if everyone *wins* the contest, the business likely understands the loss they would take, and has taken actions to mitigate that risk financially. How likely is it now? Seems low, the forecast for Monday, September 5th is 88 degrees.

Oh, and by the way, since this contest is over (August 29th has passed) I went over to the website to see what the new deal was: 20% off of the price of windows. What does that mean? You could either have a 4.5% chance at FREE windows, or a 100% (advertised) chance at 20% off of windows.