Quantitative Analysis: Trump's use of Disgust to Drive Engagement

I went down a bit of a rabbit hole this morning. I was using a sentiment mining algorithm to classify text by emotion (similar to the positive/negative polarity analysis from last week), and noticed the least-used emotion my algorithm was assigning was "disgust."

This isn't odd given field I work in, but I wondered if there are fields, or sets of text, that would skew disgust differently. Then I remembered a tweet... and some articles I read last winter about Donald Trump's status as a disgust/hygiene candidate. Here's one of those tweets:


Trump's germophobiais one of the little signals that he's credible on some of his views. Disgust as signal of moral outlook.
— John Durant (@johndurant) September 2, 2015


And I was off, downloading a few thousand presidential candidate tweets, once again. This time though, I limited analysis to the Trump disgust theory, whether, 1. he's the candidate that uses the disgust emotion the most, and 2. whether using disgust has been a successful strategy for him to date. (Side note: I could write a dissertation on emotional language used by candidates.) This is what I found:

The basics of this theory is that Trump gains an advantage by signaling disgust (re: some political event) to his followers and advocating himself as the hygienic (purity) candidate.  Examples of this behavior?

The underlying functional theories of why and how Trump uses disgust to attract voters isn't the place of this blog, but two good starting places are this New Republic article and this article from the New York Times.


SHORT: I used sentiment mining technology which analyzes the texts of individual comments (tweets, in this case) and determines the underlying emotions of each text.

LONG (skip if non-nerdy): I pulled a sample of tweets from the past four months using the Twitter API, and cleaned the data using standard text cleaning methods (removing punctuation, numbers, stem words, etc). I applied sentiment mining technology to the same tweets I pulled last week, this time using an emotion classifier rather than a polarity classifier. (Available in the R Package syuzhet, and wrote additional code to summarize the data --  if you want my code, ask).

The emotion classifier breaks down emotions into the eight primary emotions —anger, fear, sadness, disgust, surprise, anticipation, trust, and joy.  For more about that those emotions, see Plutchik's Wheel of Emotions, which is where this fairly standard list is derived.

Then I segmented the tweets by poster (Clinton,Trump,Sanders) and summarized their postings using a double normalized index of emotional strength. The scores were normalized by:
By using this two-way distribution normalization, we can determine the individual strength of emotion displayed by each candidate, controlled for each candidates tendency to be emotional AND the in-nature distribution of each emotion.

First, the two-way normalization forced me to calculate a net emotionality score.  This score is effectively the average number of highly-emotional words per tweet by candidate.  Here's what that looks like.  (I also added analysis of my tweets.) 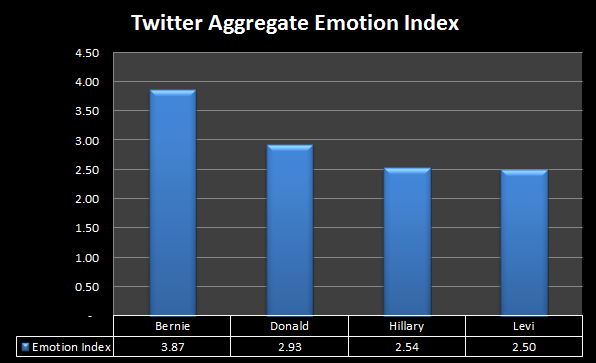 Bernie is most emotional, followed by Trump and Hillary.  I am the least emotional in my terms, which may derive from being a quant... or not a presidential candidate.

Second, I created an index to show which candidates skew towards which emotions.  This also allows us to determine which emotion is relatively strongest to each candidate (highest value compared to values of other candidates), which breaks down like this:
A chart of these emotions.

In relative terms, Trump clearly skews towards more disgust-related words than the other candidates, and this seems to be his strongest difference with both Bernie and Hillary. Analysis of the data this way allows for a quantitative validation of the disgust theory put forward earlier this year by other publications.

Third, in two prior posts on polarity, I demonstrated how Trump's use of negative words in tweets (highly negative polarity) drove engagement on twitter (roughly: the more negative Trump goes, the more engagement he gets; not true for Hillary or Bernie). Can we demonstrate the same for disgust emotions?

Here I plotted disgust words per tweet by average retweets (best measure of engagement overall). Once again there is a positive relationship between Twitter engagement and the emotion of "disgust." In fact, tweets that were algorithmically classified as emotion = "disgust" were retweeted about 1,000 more times (20% more) than Trump's non-disgust tweets (p = 0.025). 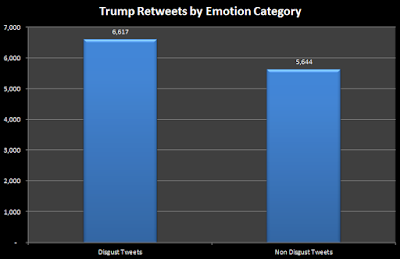 This post provided a novel method to determine relative strength of emotions used by candidates, and also test a theory about a candidate's (Trump) use of a specific emotion to gain an advantage. To reiterate my findings: