A few weeks ago my grad school alma mater (University of Kansas (KU)) won their thirteenth consecutive Big 12 conference championship (I wasn't watching the game, I have better things to do).  Much has been made on how large an outlier this streak is, if performance was random the odds would be about 1 in a trillion to win thirteen straight (not hyperbole, actual probability).

Along with this streak, there have also been some accusations that the University of Kansas receives preferential treatment in Big 12 Basketball, has an unfair home advantage, or outright cheats to win. The home-court advantage is actually staggering, as KU is 75-3 in conference home games over the past nine years, nearly a 95% win rate.

Half joking, I shot off a quick tweet commenting on both the conference win streak and the accusations.  People quickly reacted, KU fans calling me names while Kansas State University fans agreeing, generally, though more willing to charge KU with cheating. The accusations and arguments raise an interesting question: Do certain teams have statistically different home-court advantages, and is the University of Kansas one of those teams?

The main issue in calculating home-win-bias is that different teams perform better or more poorly over time, and thus we can't look at simple win rates at home over a series of years.  We need a robust methodology to set expectations for home win percentages, and compare that to actual performance.  As such I devised a method to set expectations based on road wins, and apply that information to each team for analysis.

The underlying premise of this analysis looks at ratios of home win percent to road win percent over-time and calculates the advantage of playing at home for each team, and how it differs from other teams over multiple seasons.  In detail:

The initial models performed well, and show that road wins are fairly predictive of home wins, with a .52 R-squared value (variance accounted for) and a 0.4 elasticity in the log-log specification of the model.

Starting with a visual inspection of the data, we can get an idea of the relationships between teams, home and away games, and seasons.  First a data point, teams perform far better at home (65.6 average win % wins) than on the road (34.4 average win%) winning nearly twice as often on their home court as on the road. But let's go back to our initial question, does KU win more often than other Big 12 schools at home?  The answer here is yes.

KU outperforms all schools, with the closest neighbor being Missouri (who has a limited sample as they left the conference a few years ago).  We then see a cluster of schools with about 70% home win percentages, and a few bad schools at the end of the distribution (TCU, notably).  This indicates that KU is an outlier in terms of home performance, but is that because KU is a much better team, or indicative of other issues?

Road % helps us answer this question, KU is the best road team in the conference, by a large margin.  Kansas in fact is the only team in the conference with a winning road record over the past decade, winning close to 75% of games on the road.  Even consistent KU rival and NCAA tournament qualifier Iowa State regularly wins fewer than 40% of their road games.

We know that KU wins a lot of games at home and on the road, but is there a way to determine if their home wins exceed a logical expectation?  Before moving on to the modeling that can answer our question, we should prove out an underlying theory: whether road wins and home wins correlate with one another: 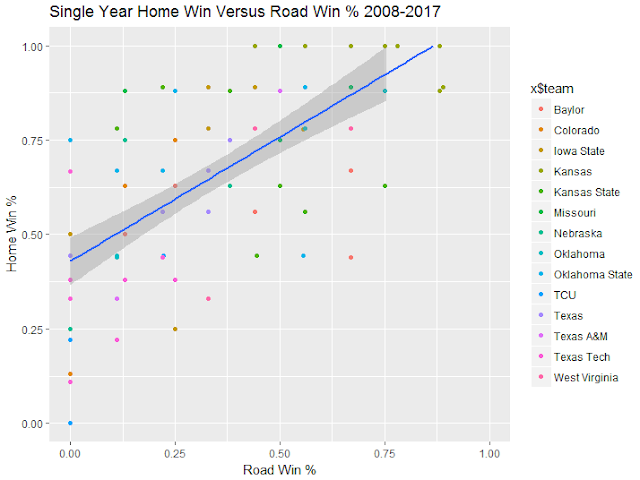 The chart and a basic model provide some basic answers:


With the initial knowledge that KU performs highly both at home and on the road, we can start our model building process. If you're interested in the detailed model, look at the methodology section above.

Using the model to calculate how teams perform relative to peers in terms of home and road wins, I calculated the average home-court-boost, or the number of wins above road-based-expectations, shown below:

Using the same scoring method we can score individual year performances, and determine which teams have the best and worst home versus road years. 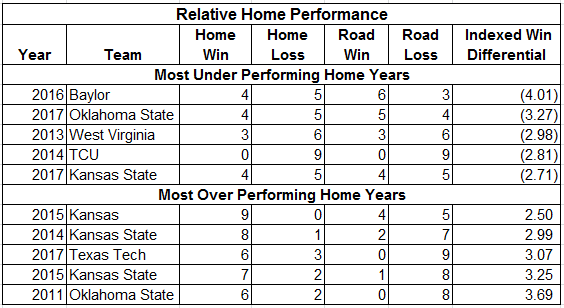 Most interesting here is that K-State's home-court advantage was a pretty amazing over the years 2014 - 2015.  During those years, Kansas State was 15-3 at home and 3-15 on the road.  At that time at least, it appears Kansas State's Octagon of Doom (I don't remember what it's really called, even though its where I received my Bachelor's degree) was a far greater advantage that KU's Allen Field House.

From the models developed we can reach several conclusions about the types of home advantages held by Big 12 teams: