Why is this such a big deal in Kansas?  A couple of factors.  First, the Kansas Constitution has a section that says the State must adequately fund education.  Second, the Kansas legislature is largely made up of small-government fiscal conservatives, so it is relatively difficult to increase public spending for anything.  Twice in the last decade, citizens have filed lawsuits against the State to force an increase in public spending.  Twice they have (essentially) won.

At the heart of this question seems to be two main questions:

If you're just interested in whether or not spending matters to educational outcomes, skip to the conclusion section.

I have mentioned before that some of my first professional work was on a Kansas education "cost study" for the State auditor's office, about a decade ago.  During that study I did quite a bit of work on relative teacher salaries, but also some work on the relationship between spending and education outcomes.  For that study we contracted with a couple of professors out of Syracuse, their study can be found here.  (That study goes into more detail, so if you're very interested in method, start there).

Now, 10 years on in my career, I know I can do the spending to education outcomes research on my own, specifically replicating their original research and answering some questions:

My methodology here is  to replicate other education research on spending to outcome, this is just part 1 of a potentially many part series.  Please keep in mind:
I went to the State of Kansas Department of Education website looking for data, and found a nice data warehouse where I can run custom queries.  I pulled down data for the past three complete school years, did a bit of data cleaning, and pulled out what appeared to be the top variables.  I also bucketized district size, as had been done in the original study.

The model type here is a cost function, which estimates how much something will cost by various input factors.  Certain things increase costs for a district, which we can measure (poor kids, having fewer kids (being less efficient), and performing better on standardized tests, theoretically, should cost more money).

So, what did I find?

The important AVGASS variable is positive, and approaching statistical significance, meaning that some kind of relationship likely exists.

Keeping in mind that this data is still a bit noisy and I'm not yet controlling for all of the factors of the original study, nor using as many years of data, this is quite promising.  I can generally conclude, spending is still significantly related to education outcomes.* 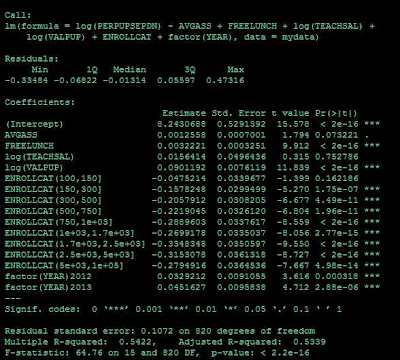 Next Steps:  For the next steps here, I will try to acquire more years of data and more attributes, clean the current data set (I think it's likely form what I've seen that I have some data entry errors), and work on a better model.  Eventually, I may try to calculate actual spending levels required to hit specific outcomes levels for different school districts.

*Quick footnote from above.  I'm purposely avoiding terms that insinuate causal linkages, largely because this analysis has not yet flushed that issue out.  Do I think it's likely that spending more can create better results?  Yes.  But I also know how confounding some of these issues can be.  Specifically, intervening and co-linear variables mean that the relationship observed isn't as simple as spend more, get better.  It's likely that more affluent districts both tend to spend more money AND get better results for other reasons (less "unmeasurable" poverty, other social problems, parents with de-facto higher education levels, etc).  My point:  this doesn't prove cause, though through iterated analysis, we should be able to move in that direction.
Posted by Lb at 1:02 PM