It's much easier to sell a business plan based on the idea of exponential growth, than diminishing returns.


A few years ago, I asked a junior team member for an update on a product he was working on.  He was the assigned analytics resource on the product, and I was curious how the new product was proceeding.  He laid out the way the product would work, followed by the general business plan.  He capped his statement off with "which would lead to exponential growth...." which he had been told by the product manager.

The last statement got my attention.  So I asked a couple of questions such as "so, how exactly would that lead to exponential business growth?" and "has anyone modeled out how this functionally leads to an exponential growth problem?"  The answer was no.

EXPONENTIAL GROWTH AS A SELLING POINT

The reason I am posting on this is something I see far too often.  Many times Marketing and Product managers make claims to executives that products will take a while to get off the ground, but will soon see exponential growth.  Often these claims don't come true, leaving analysts to blame things like lack of consumer buy-in, or being late to market.  In reality the failure goes back to the original growth projection.


So to give an example of how people get their exponential growth claims wrong, lets look at my example from earlier.  Here's an explanation of how I saw this problem:
This sounds a lot like a dating site.. doesn't it?  It's not, but, sounds like it.

This clearly wasn't the junior analysts fault, so I took my issue to the problem directly:  the product manager.  When I pressed the product manager who made the exponential growth claim, here's his explanation of how growth would occur:

So this is effectively the same business model as the Southpark gnomes, except with the network effect substituted for the ???.  But does it work? Not in the way assumed here.

The reason this isn't an exponential growth problem is simple: this is a dubious invoking of the Network Effect.  Rather than a true network where each individual potentially interacts on an ongoing basis with each other user (think: Facebook), the individuals are divided into two teams, can only connect to the other team, and after connecting once, are removed.  Simply speaking:

Because duplicate matches don't create additional "growth" each incremental growth in B holds a diminished potential of positively impacting business.


So, in reality, the growth is a diminishing returns game.  Which looks like this: 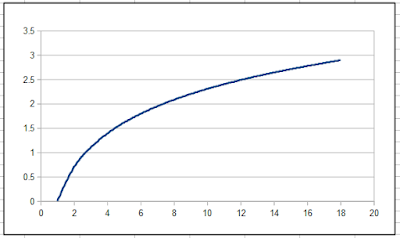 Rather than the expected exponential growth, which looks like this: 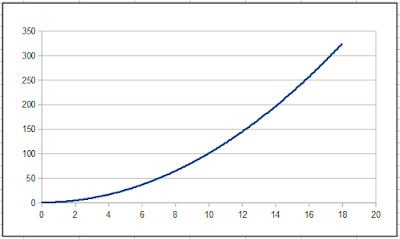 This post is a simple warning:  there are a lot of dubious claims of exponential growth out there.  Always try to model out the underlying processes with realistic probabilities, before buying in, or before giving the analytics "go-ahead" to new projects. BTW, last update I have on the project stated above is that it was cancelled after not achieving desired growth results.