In yesterday's post looking at gender ratios, I noted the weird highly "male" clusters in Western Kansas. Per the post, those clusters turned out to be mainly explained by prisons, as well as labor-based immigration.

I thought about this a little last night.  If prisons *move* people demographically (realizing they don't impact actual community dynamics due to incarceration) what other demographic shifts could occur due to the location of prison populations versus actual population?

To think about how prisons may shift demographics, I needed to think about how prison populations are different from the general population. More men are incarcerated than women, obviously, but I also knew that more African Americans are incarcerated. This could be exacerbated in rural communities, due to the homogeneously white populations in these areas.  The question came to if the skew was large enough in Kansas to impact demographics. I found my answer here, with this fact:

African Americans are over represented by a factor of about five in the Kansas prison system versus the general population.

I plotted the data on the map, and then focused on the area of northwest Kansas as defined by the area west of Salina, and generally north of Great Bend.  This area is interesting to me because both my mother and my father came from here and most of my family still lives in Mitchell and Osborne counties.

Here is what a map of counties by % African American in Northwest Kansas looks like:

So, a lot of red, but three counties with greater than 1% African American populations.  Explanations?

If you prefer data in a table format, here's an easier look with a couple of other data points.  There is also a fairly large African American population in Ellis county, largely associated with the college (Fort Hays State University).  Still, in aggregate that county is less than 1% African American. 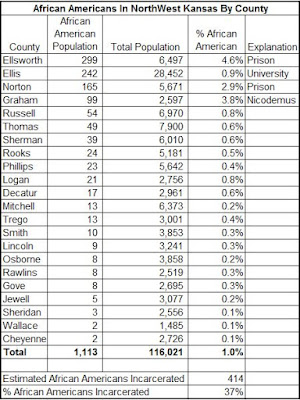 After some cross referencing with Kansas Prison records, census data, and a few calculations, it appears that there are about 414 African Americans in prison in northwest Kansas.  Which leads to a startling statistic:

37% (more than a third) of African Americans living in northwest Kansas are prisoners.

I realize that this doesn't mean that 37% of African Americans living in the area go to jail, but instead there are two underlying mechanisms that end in this demographic distortion:

I don't do a lot of commentary on this blog, but I will here, as northwest Kansas is sort of my "homeland."  Two final scenarios to think about: