Last week, my research for a friend led me down a rabbit hole of local gender ratios.  That same research quickly helped me find some racial anomalies in North West Kansas, which turned out to be influenced by prisons.

I had promised a second post on gender ratios, but the other post was a bit more interesting, so it took precedence. After looking at the county level last Thursday, I  drilled into the census block level.  The census block is a lower level of data, of varying geographical size, for which there is detailed census demographic data.  What I found was kind of interesting.

First a map of gender ratio by census block.  The map is shown below.

My main observation was this: larger, more rural census blocks tend to have more men, while smaller (city/town) blocks have more women.  But a lot of variance in a map like this.  What if we focus on a smaller area.  Here's a map of Johnson County Kansas only: 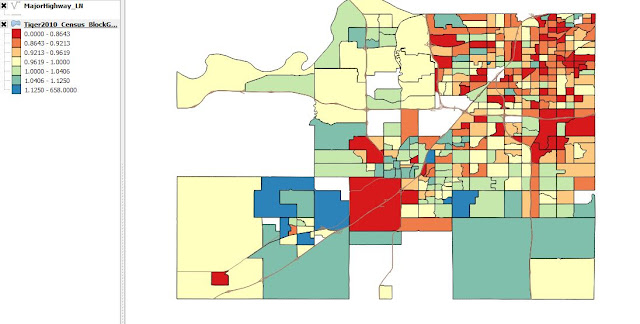 What causes this?  I have a few a priori guesses, but nothing strong:


That's an ocular analysis of gender skews, any statistical validity though?

Can we model gender ratios by other data? If you want to skip the nerd stuff, here's your short answer:

It can be modeled, and significant predictors found, but the model isn't hugely "predictive."


What factors appeared to matter in predicting gender ratio?  Here are our variables:

So do the models work?  Yes and no.  Here's the first model, on statewide data: 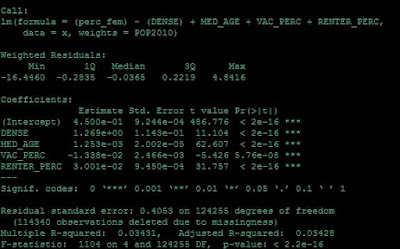 Notice that each variables is significant and in the correct direction.  A couple of comments though.  First the data R-squared is low, so while we have significant predictors, we don't have the most "predictive" model.  This tends to happen quite a bit when predictive percentages like we are here, in reality, there are likely a lot of factors that impact gender ratios, many local effects that are difficult to measure.  Second, we have over 120K observations here, meaning a lot of statistical power.  So while are p-values are *very low* this isn't necessarily representative of very predictive variables.

Because of the statistical power issue, and concerns if different counties behave differently, I also ran the analysis for a sub-sample of counties.  Generally the relationships hold up, but are weaker (due to lower N in more rural counties).  First, the county I live in, Johnson County: 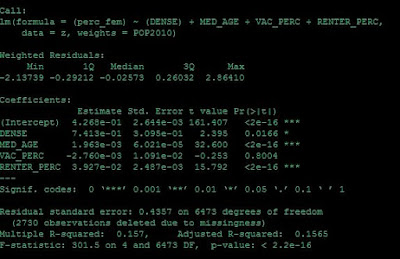 Next the county where I grew up, Saline County: 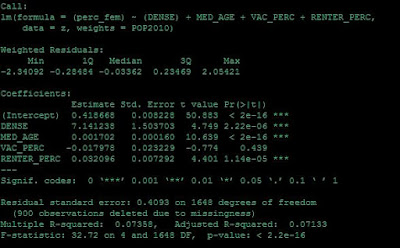 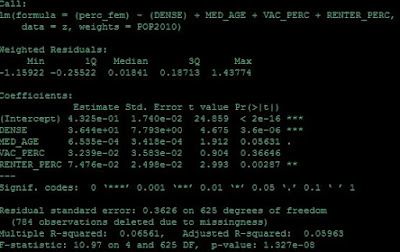 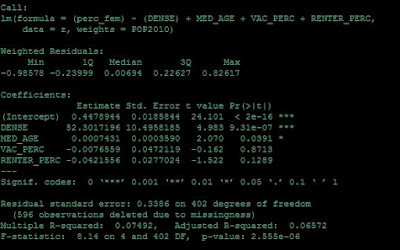 A few easy bullet points for a conclusion: