I had a great time watching last night's GOP debate with my wife.  I missed the crazy on twitter last night due to being 'in-between phones' right now.  But I still watched and enjoyed.  This morning, I couldn't resist an analysis.


My take on the debate, in two sentences per candidate.  (Mostly intended to be humorous).

I downloaded tweets from this morning (approximately 7am - 11am) using the #GOPDebate hashtag and went to analyzing them. First I wanted to know about dominant subjects.  Trump is dominating still, the only other candidate showing up is Carly Fiorina. 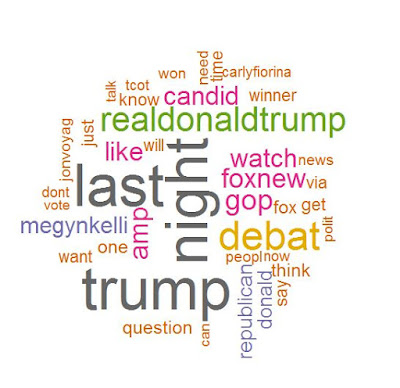 Then I wanted to know which words were most associated with which candidates.  I've used this statistical method before, you can read about it on prior posts.  Here's Huckabee's associated terms, my favorite terms from this are "big government", "downright", "personhood",  "perv", and "jingoist".

I created a few more of these down the page, less amusing bust still interesting.

The tweets don't break well into set topics, partially because there is a large breadth of topics from last night, and partially because individuals are going on their own little rant, largely divergent at that.  But I did put together a topic model.  There are some obvious topic breakdowns here.

Of note are:
A lot of interesting topic areas, but those are the big three, in my opinion.

And, some more candidate term associations:

Chris Christie, who is associated with "blowing" something hot, and his interaction with Rand Paul (one of the best exchanges of the night).

And Scott Walker, with a bunch of Wisconsin and union references.