I was minding my business yesterday afternoon, when I was approached by someone on the internet with data I might be interested in.  I was half-expecting Ashley Madison or other scandalous data, but what I was presented with, was much, much juicier: election data.  Kansas Governor's Race 2014.  This is interesting data, given the current debate over election fraud in Kansas.  Also, for some reason, this data has not yet been posted to the Secretary of State's website (I would soon find out it was submitted by counties in poor formats, so maybe this is explainable).

If you're curious about the history of my analysis of Kansas election fraud, I've written on it a few times below.  The basics of it are this:

A WSU National Institute of Aviation Research statistician says she found an anomaly in voting records related to size of precincts and correlated Republican vote shares.   This pattern has been found in several elections, going back several years, and states, and she thinks this may be evidence voting machines may be unreliable (potential systematic election fraud).   I replicated her analysis, fairly easily, and her statistics are "correct." That said, I disagree with her, on the basis that precinct size is not a result of a stochastic-random process, correlation with demographic factors, and endogeneity to turn-out problems in high-republican districts.

And my prior posts for ongoing reading.

The data came from an internet source, but was a forward from the Secretary of State's office.  I believe it is accurate, there's a couple of times I missed a control total here and there, by small amounts, and uncorrelated to any one candidate.  I was able to cross-reference it to data on a handful of county websites and national aggregate data.

The data itself was in pretty poor form.   101 counties were aggregated in a good spreadsheet.  Four counties were on pdfs:  Shawnee, Sedgwick, Wyandotte, Johnson.  These are the most populated counties in Kansas, so this is an issue.  Two the counties were easily recoverable, two were not:

The methodology here has been well documented in my other posts, so I won't go into details.  Here are the basics of what I found. 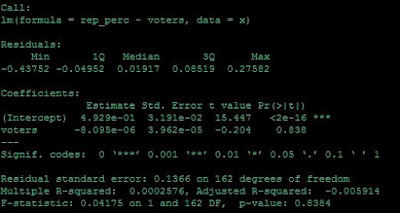 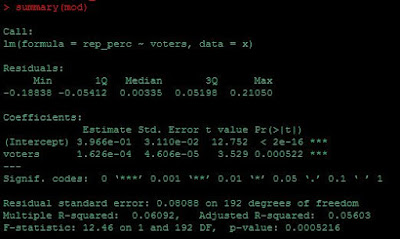 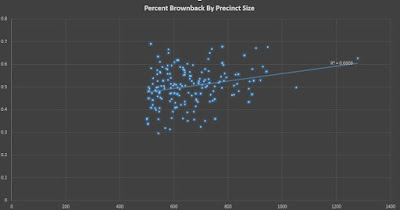 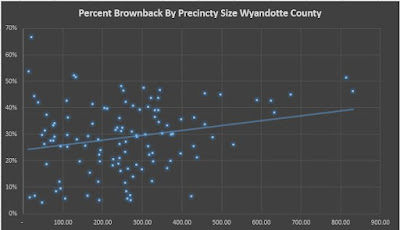 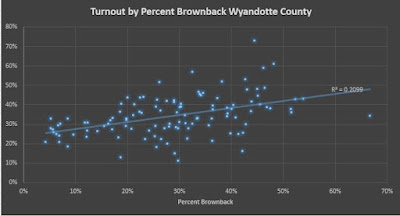 I'm missing some counties, and this was just an initial exploration so I'll post more later, but the takeaways for now: