And it's that time of the week again for the formulaic #ksleg power rankings.  I think I can almost automate this completely at this point, but here are our three steps:

What topics were discussed this week?  Here's a word cloud to get us started: 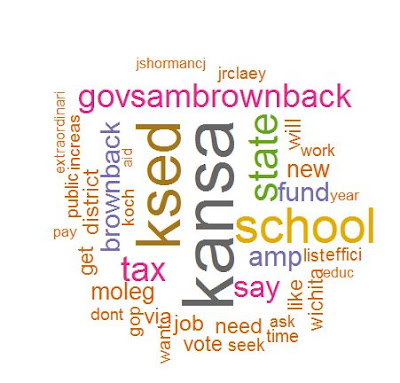 This was a relatively low-volume week on the #ksleg hashtag, and our topic mining only found a few distinct topics:

So, it was a slow week, but a few meaty topics.  I look forward to seeing how items 1 and 2 play out in the future.

And our somewhat sarcastic power rankings.  Of note: slow week for BryanLowry3.   My speculation is that he's actually tweeting less to avoid a higher ranking, allowing him to be a "sleeper pick" when the regular season comes around in January. 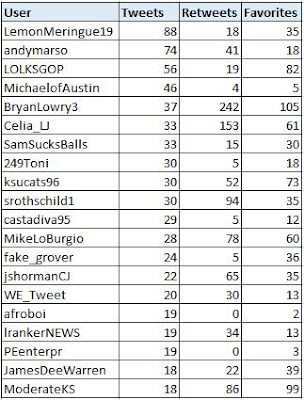 There are so many fun things I can do with my sentiment mining algorithm.  First I can measure the general negativity/positivity on a specific set of tweets.  While this graph may make #ksleg look more positive than negative, that's generally how tweets look.  In fact when I compare these to sports related topics, they are about twice as negative as sports.  But I will cover that in a future post. 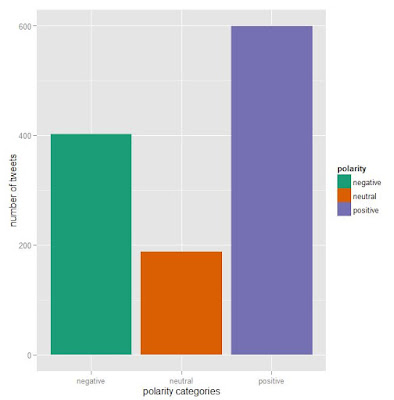 One additional fun thing we can do with sentiment mining, is to statistically determine the Twitter screenname most associated with a specific emotion.  Methodology on this is to determine via chi-square test the  user with the tweets most disproportionately weighted towards each emotion.  Here are the results:

These results generally make sense if you follow this hashtag regularly.  LOLKSGOP is angry with the State of Kansas, SpeakerTimJones is disgusted with what America is becoming and andymarso is disproportionately positive, compared to the rest of the traffic we see.