I have blogged a bit about election issues in Kansas, specifically Beth Clarkson's claims of election fraud.  There's another issue in the news though, a move to purge voters who haven't provided proof of citizenship from the registration lists.  The move would begin purging voters from the 30,000+ voter suspense list if they haven't provided proof of citizenship within 90 days.

I won't provide a lot of context on this issue (the article I linked to, plus a lot of commentary on the internet does this for me), but politically it is seen as favoring Republicans.  That's because it's believed to impact the younger, more minority, poorer, and generally more Democratic voters.  But is that true?  And how big is the impact?

We received a copy of the list for analysis this morning.  In this post I am going to create some quick graphics, maps and calculations, with more promised at a later date.

One early question I had about the voter suspense list was did: it impact voters differently from different parts of the State?  I created a metric called suspense rate, which is effectively the number of voters in suspense divided by total registered voters in each county.  Here's the map of that metric:

The map shows a high level of variation in the metric, with some counties having three times the suspense rate as other counties.  There's not a clear pattern that I am picking up on, though some urban and near-urban areas have higher suspense rates.  I ran some quick correlations (will post tomorrow) and found that racial and age demographics correlate with suspense rate, though somewhat weakly.  I suspect that many factors can drive this, including local election policies and procedures.

From the Wichita Eagle we know that younger voters are impacted more, but what does the age distribution of suspended voters look like?  Here it is by party. 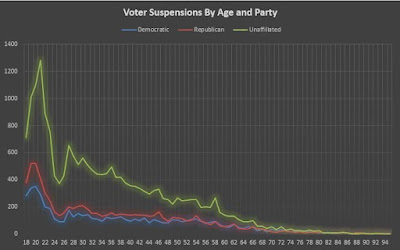 That's a steep curve, and there are a lot of people under 25 on the suspense list.   But how does that compare to general population demographics? 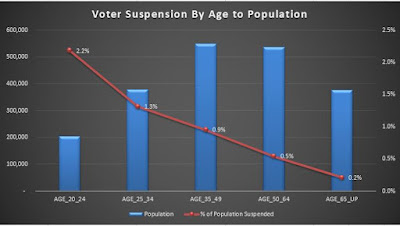 We know that younger people tend to be more liberal, and that opponents of citizenship verification laws tend to be democrats.  But can we infer from the actual impact?  I acquired total voter registration numbers from the Secretary of State's office and compared them to voter suspense list. Here are the numbers:

The thing that sticks out is that unaffiliated voters make up a larger portion of the suspense list than all registered voters, likely because younger voters have less strong political ties.  But as far as party impact, there are far fewer Republican voters on the suspense list than the total registration list.  Once again, this could be largely driven by age demographics, but the net is a 6,000 differential favoring Republicans in elections.  Oh, and here's a "pretty" version: 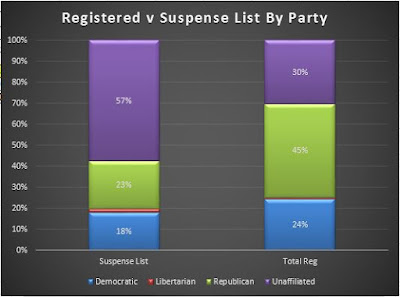