Will University of Kansas Football Win Any Games This Season?

My dual personalities have two responses to the the question in our title.

Levi the KU Football Fan: Absolutely not. They will lose every conference game, most by 3+ touchdowns, and be the embarassment of the Big 12 this year. 95% sure of this.


Levi the Statistician: 47% chance they will win a conference game.

Why the different responses?  Two real reasons: the cynicism of a KU Football fan and the way low-probability aggregation works.

I became a KU Football fan after arriving on campus to start graduate work in Fall 2003.  KU Football wasn't very good compared to my undergraduate alma mater Kansas State University, but the games where more fun to watch, for a few reasons:

Don't get me wrong, I still follow and enjoy K-State Football, but I also see why KU Football is fun: low expectations.  Recently though, expectations have hit rock bottom.

A quick overview of KU Football over the past few years.  In the mid 2000's (2006-2008) the team got really good.  As in Orange Bowl champions, finishing season ranked in top-10, sending pro-bowl caliber players to the NFL good.  Then the team had a couple of rough (read: normal KU Football) years, the coach was fired for supposedly being abusive to players.

This leads us to the current day in KU Football.  The last five years have seen three coaches, two seasons with no conference wins, and generally embarrassing play.  Rather than relive that nightmare with description here, I'll just post the conference results of the past five years. The futility of the KU Football program over the past five seasons make conference wins look like matters of random luck.  What would be a reasonable probability estimate of per-game futility?   Hard to say, but we have historical win percentage in recent conference games to use: .068 (see chart above). 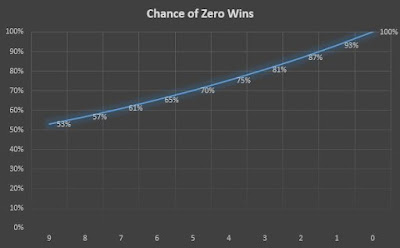 But wait, KU has a 47% chance of winning a game this season, but they will be underdogs by roughly 93%-7% in each game?  How can that be?  This is a part of aggregate sports probabilities that gives some people trouble.  It's difficult to imagine that individual events with such low odds (KU Football Victories) will ever "occur" in real life, but over time, probability theory shows us it will.  An extreme non-sports case example would go something like this:

Setup an experiment where people walk across a field and you record whether they get struck by lightning.  The odds of each person being struck by lightning will be impossibly low, let's say 1 in 500,000.  So the odds of "winning" a single game would be impossibly low, but repeat that experiment 500,000 times, and the probability of a "successful" lightning strike increases to 63%. 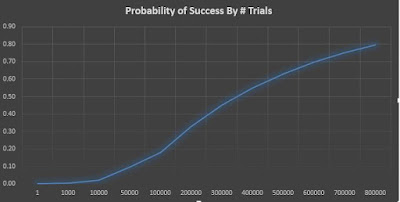 Looking back this is a lot of weird work to do on a college football team.  But a couple of takeaways: