My post from earlier in the week on Voter Suspension Demographics has received quite a bit of traffic recently, probably because of the lawsuit file by former gubernatorial Candidate Paul Davis against Secretary of State Kris Kobach.  In that post I demonstrated that suspended voters are generally younger and less Republican than the general voting population.  I also promised a  deep dive into racial and other demographics of suspended voters.

The suspension list doesn't identify the race or economic status of each person, so we can't measure these types of demographics directly.  What we can do, identify members by their communities (here represented by zip codes) and which community demographic attributes are most predictive of a high suspended voter rate.

I looked at census data by zip code in Johnson County, and also confirmed that the results are similar in Sedgwick County (two largest counties in state).  I plan on moving fairly quickly through a few data analyses, so I'll just state my findings here (if you have any questions please comment):


First, a map of voter suspension rates in Johnson County: 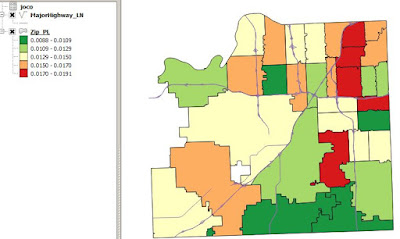 Based on our earlier analysis, we expected the age of a community to be highly related to the percent of suspended voters.  There was a relationship and in the right direction, but it wasn't as strong as we expected.  Generally this means, that while younger voters are suspended at a higher rate, this isn't an underlying driver at a community level.  We also may need to measure this differently, as it may be more related to "young adults" rather than an overall age metric (median). 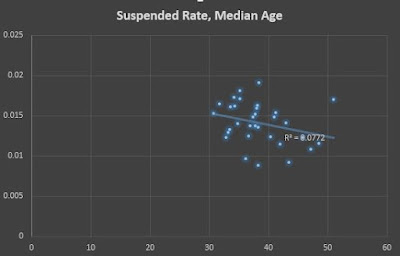 Not too relevant, but I mapped this for fun.  Fun stat: Gardner is youngest community in the Joco, Leawood the oldest. 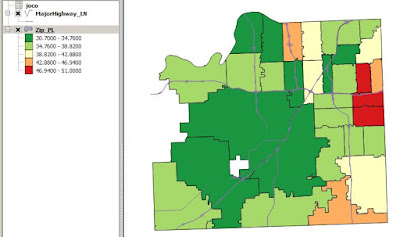 A lot of the rhetoric I hear about citizen registration laws is regarding illegal Mexican immigrants taking over the American political system by voting in our elections.  From an a priori point of view, I assumed if this was true (either the fear of Mexican immigrants, or that this policy is effective against that) that we would see a strong positive relationship here, we did not.  Here's the chart. 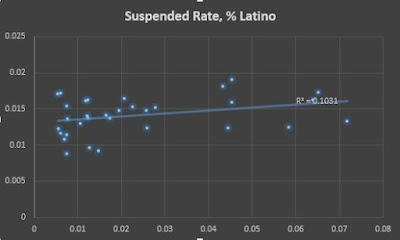 And I had my mapping software here, so here's a map of Latino % across Joco. 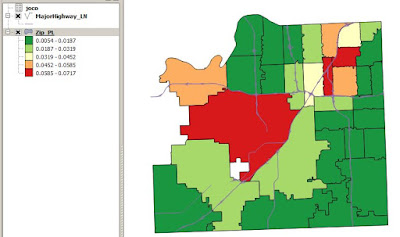 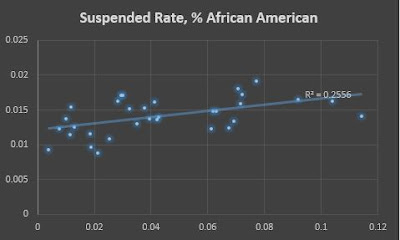 And a map of African Americans living in Johnson County.  The highest percentages being inside the 435 Loop. 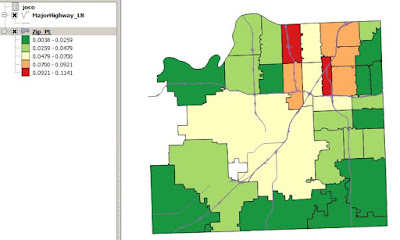 The final major correlation I found with suspension percent as a negative correlation, but the strongest significant correlation we found.  The higher the Home Ownership rate the lower the voter suspension rate in that community.  Home Ownership is generally used as a proxy for community affluence.  We know that younger people are more likely to not own their homes, so it is somewhat likely it's a combination of age and affluence at play.  Here's our graph. 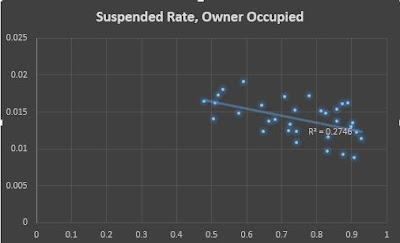 And a map of home ownership rates.  The reds are the highest, with greens being the lowest. 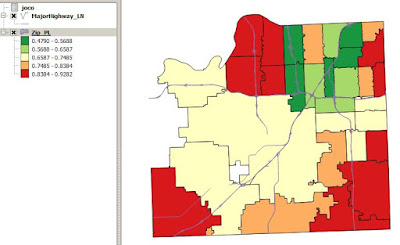