A few weeks ago I posted a fairly hefty critique of a survey conducted by Fort Hays State University researchers on the political climate in Kansas.  The survey claimed a lot of things, but the issue receiving the most press was that Kansas Governor Brownback had an 18% approval rate.  I took issue with that number for various reasons, largely due demographic skews in the data, hinting at sampling or response bias.

Sometime later a twitter user asked me, if not 18%, what do I really think Brownback's approval rating might be.  I looked again at the skews, did some quick math, adjusting for prior demographic distributions and likely errors and came up with a range.  This was me really just trying to back into a number from bad polling data.  Here's my response on twitter:

WARNING: "I TOLD YOU SO" coming.

This week another survey was published that reviews the approval rate of all governors in the US.  You can find that study here.  I haven't fully vetted the methodology, but the methodology indicates they at least tried to deal with demographic issues.

What did that study tell us?


Brownback's approval rate is 26%.  LOOK THAT'S IN MY RANGE!

But that dataset also provides information on other governor approval ratings, what can those tell us?

COMPARISON TO OTHER GOVERNORS 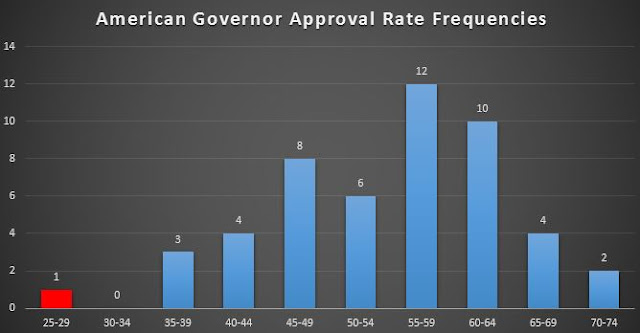 Takeaways bullets:
Posted by Lb at 9:32 AM