Earlier this week, a certain meme making the rounds on Facebook drew a lot of criticism and quiet giggles from the math literate.  Here's the meme, see if you can pick out the error... 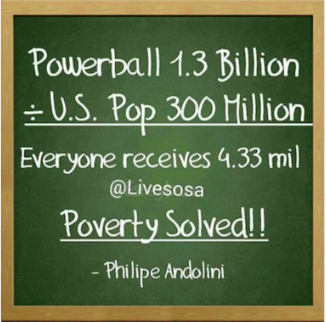 After quiet giggles, I realized that there were actually two errors in the graph:

The math error here is pretty straight forward, in fact someone likely just used the wrong number of digits in one of the numbers when entering this in a calculator.  The error doesn't actually bother me that much, arithmetic happens.  In fact, there's a pretty good reason these types of errors occur: most people don't spend their days dividing numbers in the billions by numbers in the millions.

Truth is, math errors are easy, and in the field that I'm in, I see these types of errors all the time.  But what prevents these regular math errors from leading to larger societal breakdowns?  Context.  Analysts consider context when evaluating the results of their equations, and review for reasonableness.  In this case, if you know anything about how the lottery works, you know that the results from the meme are unreasonable. Which brings me to a larger point on the context of the lottery...

The reason I knew the meme was wrong immediately wasn't because I did the math, it's because the way the lottery works.  Effectively, the lottery in the United States is a money making (for states) gambling-based financial instrument.  Here's a simplified primer:
There are a lot of other rules in the playing of a lottery like the Powerball, all of them actuarially can be accounted for, and most of them don't significantly impact the results.

The important part here is that there are no external inputs to the Powerball (meaning that no one -- government, private donor etc.-- is net infusing money outside of ticket sales) and the Powerball as financial instrument doesn't create money for ticket buyers (well, as an annuity, but that amount is just long-term investment returns, see below).  In aggregate it loses money for buyers, as the State takes away a share of ticket sales.

But how does this relate back to our initial meme?

I should probably have ended this blog entry there, but there's one last *numbers* piece to lottery payouts that people should probably know.  That $1.5 billion advertised does not equal how much money you would receive if you won today.  In the end, you have two options in how to claim your lottery prize:
Here's the problem: That $1.5 billion jackpot number is the aggregate of the annuity payout (not adjusted for inflation, either), not the lump sum amount.  In essence the lottery quotes the larger of the two amounts, in a way that is probably misleading to most people who don't understand annuities.

Obviously this post has deviated from the normal content of this blog somewhat substantially, however I think it makes a few key points: