One facet of the Twitter argument was the growth rate throughout careers, and whether entry level or median salaries were more relevant for low-wage employees.  I was initially very interested in the data, not because of the Twitter fight, but because of something else I've observed.

The observation: there is quite a bit of variation in career path and salary once someone starts a profession. Some professions (bank tellers, for instance) seem to top out their income only a few years into their career, whereas others (analysts, back-end finance managers) tend to see steady income growth throughout.

Curious, I noticed the data had entry level salary, experienced salary, mean, median, etc.  I messed around with the data, and calculated the jobs with the best and worse career "upsides" as defined by ratio of experienced to entry level employee (with a minimum $50,000 differential to screen out some junk).  Here's a beautifully colored list of the best career upsides: 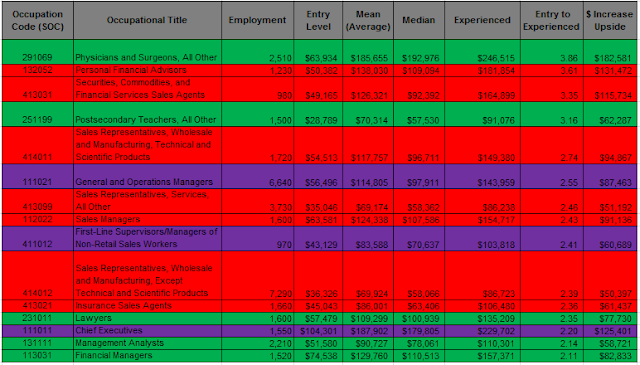 Why did I color it like this?  Because I noticed some trends, three categories of careers in these groupings:

BTW, anyone else think it's absurd that they actually state a value for "Entry Level CEO?"

The list of low-income growth careers is much less interesting.  It's all service industry, many careers that are populated by high-school students.  These careers are also far different than our three groups above, in that expertise grows little over the career, there's no management (unless you transition), and there's little opportunity to grow a book of business. The best opportunity in these fields is to move to management, or a more skilled version of their current job.

One last thing I did, in relation to the initial Twitter fight, was to answer the question, how does wage growth throughout career vary by initial entry level wages.  Here's a chart (ratio of experienced:entry level salary, by entry level salary):

The answer isn't as clear as one might think, but two points can be made:

Quick methodology note: These numbers represent point in time estimates of experienced versus entry level employees, and don't represent longitudinal data. Also, people tend to transition between job types, which can bias the numbers, for instance when someone moves from a high level manager to a chief executive (this analysis assumes you stay in a similar role).