Trump Gets A Large Boost from Negative Tweets

Earlier this week I posted on Presidential candidate tweets (Donald Trump versus Hillary Clinton) and how they differ and are similar (spoiler alert: everyone is talking about Trump... a lot).  That analysis was largely qualitative, but I conducted a more quantitative analysis as well.

I'll include some nerdy details below (as well as code) but the analysis used sentiment models to determine the underlying sentiment (positive, negative) of candidate tweets.  Here's a quick definition of sentiment modeling:


"refers to the use of natural language processing, text analysis and computational linguistics to identify and extract subjective information in source materials."


Effectively what we're doing is measuring the underlying feelings and emotions expressed in a tweet, and then reducing those to positive and negative.  This analysis is interesting partially because Hillary is criticized in the press for being overly negative, and not smiling enough, which is a weird criticism for a Presidential candidate.  But can we validate that notion with data?  I will post visualizations below, but here are a few quick findings: 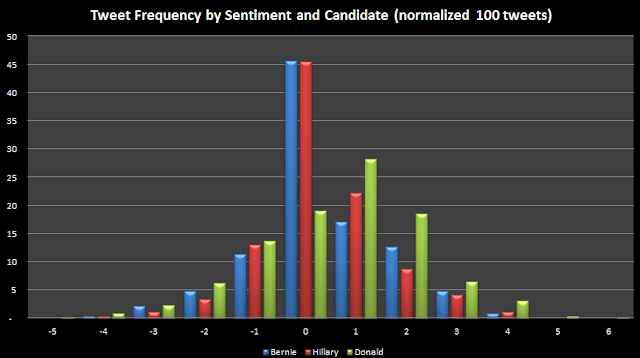 Here's a look at some distribution statistics, note that Trump has a significantly wider distribution, and is in net slightly more positive (also note that I included my own tweets in this :)).

While in the data, I found that some of Trump's more negative tweets were, at least a bit amusing.  Should we look at them?  Let's do it in two ways.  First (to be fair to both candidates) I created wordclouds of each candidates most negative tweets. (First Trump, then Clinton.) 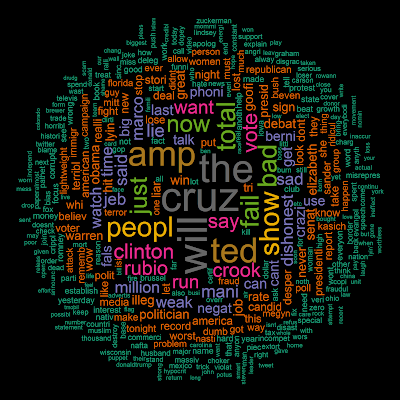 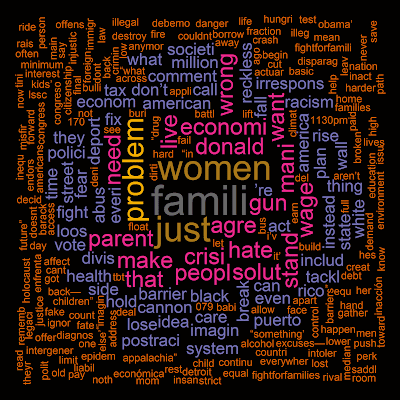 The interesting information here is that when Trump goes negative he most often uses the names of opponents, and worlds like weak, total, and fail.  When Clinton goes negative she is most often referring to families, women, gun, and crisis.  I also ran this for Bernie who seems to go most negative when talking about the country, poverty, and America. 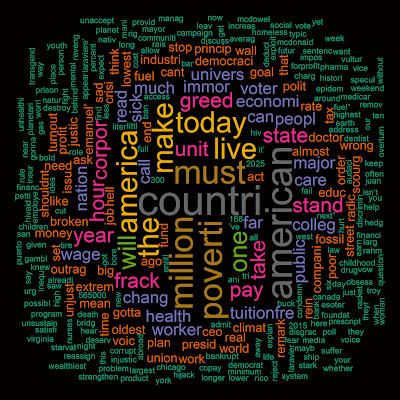 Wordclouds are fun, but Trump has the ten most negative rated tweets on the list, let's just read them (I stripped these down just to the simple text -- you're welcome).

At dinner with my wife last night I described the project and she was quite interested.  Together we came up with another interesting question: engagement.  Do internet users engage with Trump and Clinton more or less when they are more positive and negative?

The easiest way to measure engagement is retweets, because it also measures a network effect.  I had to remove one tweet from this analysis ... this one.


Which was a far-outlier, it's actually sentimentally positive (he loves Hispanics) but the reaction and underlying sentiment are something completely different.  This is also an advertisement for one of his businesses, ensuring it is positive in tone.  Anyways, I created a method to compare tweet sentiment to average engagement.

The chart below compares Clinton to Trump, showing an interesting fact: When Trump goes more negative he gets more engagement and response, Clinton's pattern is not as clear, and does best with slightly positive tweets. (Engagement is indexed to 1.0 = average retweets on user basis.)

And another view of Trumps activity:

From a statistics perspective this is a significant correlation (r = 0.14), but with a low amount of explained variance.  For every point of negativity (net negative word) Trump gets (on average) an additional 240 retweets.

In this case, sentiment models provided a lot of interesting information, more so than our initial analysis from Monday.  The main takeaways are:

For this analysis I used the word list and initial code from the R-Bloggers website, with a couple of changes: