When I go on Twitter, I'm often confronted with this view:

I am blocked by thousands of people on Twitter.  When I tell people about this publicly they often react in thinking I must be the worlds most massive troll (but I'm not).  But most of these "blockers" are accounts that I've never interacted with, they have essentially blocked me either categorically or because I'm part of a massive block list.

Blocking has become a major part of the user experience on Twitter for many reasons, and that's largely out of the scope of this blog. To understand how someone ends up blocked like me; you should understand two products:


After a day when I found a couple of random accounts blocking me.  I realized their was a Data Science angle, specifically:
The answer to these questions ended up being "yes" and "yes."  Here I'll describe the results, first with a description of results and then a concept of the data science method.


THE DATA: WHO BLOCKS ME

To-date, I've used an algorithm to find about 3100 people who block me on twitter.  Releasing the full list would seem to be doxxing-however the public nature of which "verified" accounts block me seems less problematic.  Here's a listing with evidence of some "celebrity blocks": 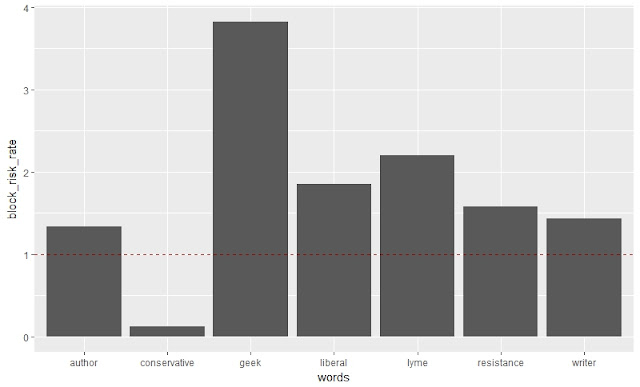 A score of 1.0 deems that this word neither increases the probability that a user will block me, a score of 2.0 is twice as likely to block, whereas a score of 0.5 is half as likely to block.  There are two effective dimensions to the majority of people who block me:
One outlier word is the term "lyme" which turned out on inspection to relate to people who believe they have "Chronic Lyme Disease," a condition covered by Evidence Based Medicine proponent Orac over on his blog.


And because I know everyone loves wordclouds (sarcasm), on a recent long social scan, I created wordclouds of people who block me.  Here's what that looks like, first looking at those who block me: 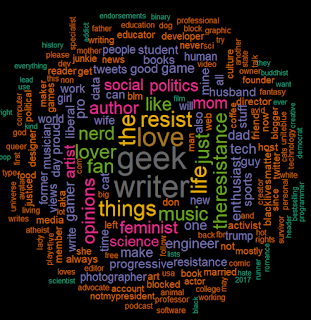 And those who do not: 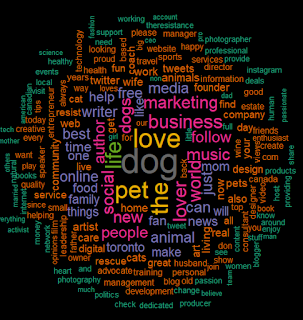 Apparently, unbeknownst to me, I am loved by dog/pet lovers (potentially an artifact of sampling, rescan method-but few of the dog-lover accounts blocked me).

HOW I ENDED UP BLOCKED

To begin my methodology, I started with a bit of a priori theory-specifically-what are the incidents that led to my blocking?  I'm blocked by people across the political spectrum, from conservative politicians in my own state to "resistance" members that are famous nationwide.. and an odd number of science fiction writers (I'm not a fan, don't care).  Here were my best theories of my own blocking:

Wheaton's block list, as well as the block together App seemed the most likely scenario for wide-spread blocking.

HOW TO DETERMINE IN CODE THAT SOMEONE BLOCKS YOU

Figuring out that someone blocks you via the Twitter API is actually super easy. My initial scanner ran all inside of R, then I ported it to Python using the tweepy package.  The basic steps:

Note: This code is simply for a single user.  The entire application I wrote is a full iterative search-for-user, check block status, recursively search for more users, model, repeat application in Python with a Microsoft SQL Server backend that I am not publishing in whole at this time, for various reasons.


HOW TO CHOOSE WHICH USERS TO CHECK-AT FIRST

Knowing that our end goal here is to optimize an algorithm which will tell us which users to check for blocking, we first need to gather an informed set of accounts that will tell us which types of users block us.  Using the a priori theory of why users may be blocking me, I turned to two places:
I used this strategy to get an initial subset of users to figure out what types of users might block me.  So I started there, using the Twitter API to download all the Twitter ID's associated with Wheaton's followers (reduced Python below-I'm showing the basic blocks in segments here for ease of presentation).

Why would I even need to model my blockers? A few reasons:
As such I began creating a model against Twitter profile data to determine which accounts are likely to block me.  First, what data elements will I have available?  The basic elements available are what is pulled from a profile scan of the Twitter API:

Most of these are fairly easy to analyze, with the exception of the text description (of course, the most rich sense of actual attitudinal data which is likely to predict who you may block). I can't push a text description directly into a ML model, so I took two strategies in creating numeric data from textual data:
Data was clean at this point and essentially ready for modeling.  Dependent variable was whether or not I was blocked, N was all accounts "checked" to date, independent variables are as listed above.

As expected, textual data was most predictive with several other items also providing important information to the prediction.  Note: many of these variables have complex interactive effects inside our XGBTree, so it's not a simple matter of "more followers==more likely to block."

WHICH ACCOUNTS TO CHECK FIRST

What is the value of modeling this data?  Because the Twitter API is rate limited I can only check a certain number of accounts per day, so it's good for me to use my rate limit wisely.  By predicting which accounts are most likely to block me, I can simply prioritize those and thus increase my find rate.  Using this prioritization at first increased my positive block rate by about 3x, from about 0.1% to 0.3%.


HOW TO GET TO NEW ACCOUNTS TO CHECK


Far above I covered where to start with a large number of account to check, deciding on followers of Wil Wheaton and the BlockTogether follower list.  But once I've checke all of these accounts where should I go?  Here I implemented two strategies:

This iterative method can lead to a biased sample effect over time-so it's important that you also include some random accounts in your sample OR some that are intentionally in large deviation to your current pull.

In the end a few points to take away:

As a personal aside, I don't care a lot that I'm blocked on Twitter, it doesn't appear to effect my user experience in a material way, as I am not blocked by any accounts I would normally follow and it's not an emotional issue for me.  I do find it troubling that the pervasive use of block lists is allowing many Americans to insulate themselves from conflicting points of view, including primarily blocking people with whom they have never interacted with in the past.